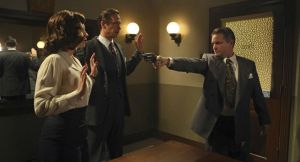 Everything is moving towards the endgame in this great penultimate episode for Agent Carter, which sees Dr Ivchenko first use his powers for some good (albeit in a flashback), and then to much deadlier effect, leading to the death of yet another of Peggy’s SSR colleagues (or rather, former colleagues, given the fact she’s fired partway through the episode).

SNAFU (the Army acronym for Situation Normal All F***ed Up) pretty much sums up the SSR’s position in this, as both Ivchenko and Dottie lead them a merry dance while they’re tied up trying to get the truth out of Peggy. Edwin Jarvis steps up to the plate, arriving at the SSR with an apparent out for Peggy, and it’s a good thing he is there to explain what’s going to happen to the poor agent who’s been duped by Ivchenko.

Hayley Atwell revels in the many dramatic chances she’s given this week, letting her SSR colleagues know exactly what she thinks of them, and explaining how she has been able to carry on her own investigation under their noses, all because of their own attitudes. James Darcy also comes into his own, with some great comic timing as well as more serious moments. Of the SSR, Shea Whigham’s Chief Dooley gets the most attention this time out, and is outstanding.

Verdict: The pieces fall into place in this dramatic, tension-filled episode. 9/10