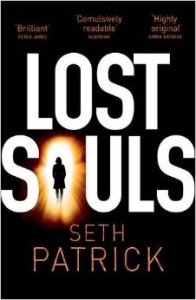 I really enjoyed Seth Patrick’s first novel, Reviver, and thought originally that his second, The Returned was the sequel – it’s not; it’s a novel based on the TV series. This, however, does see him return to the world of Revivals, where the dead can be brought back to life briefly in order to identify their killer or to say goodbye. Inevitably, there are those who are opposed to such activity, deeming them blasphemous or worse, and as this novel starts, it seems as if they are getting some foothold in society.

A fast-paced story that reprises everything you need to know about Reviver, Lost Souls is a more polished read than its predecessor. And as with that book, Lost Souls shows some of its roots quite openly – in his acknowledgments, Patrick credits the work of Nigel Kneale, Alan Garner et al – although personally I’d have removed the direct use of the name of a key location in Quatermass II, which is a bit of a speedbump for those familiar with the good professor’s adventures (although I love what Patrick does with another element of that serial towards the end of the story).

There are some quite gruesome moments in this – not just the dead remembering their last moments, but a torture sequence that amply justifies the torturer’s nom de peine. Patrick concentrates firmly on Jonah and his friend Never, as allies and enemies from the first book reappear, sometimes in surprising roles.

Verdict: A fast-paced, and at times horrific, thriller that confirms Patrick as a name to watch. 8/10