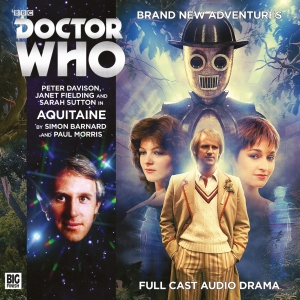 Responding to a distress call, the Doctor, Tegan and Nyssa find a most unusual robot…

There are those who have been concerned that with Big Finish’s forays into other SF series (The Prisoner, The Avengers, Survivors, The Omega Factor etc.) as well as the 21st century incarnations of Doctor Who that somehow the main range would get overlooked. On the evidence of this second story for the early Season 20 crew, that worry is definitely misplaced – Simon Barnard and Paul Morris’ tale maintains the high standard set by the opener, with a less humour-driven piece than we’ve come to expect from the pair. It’s one of those stories that hits the ground running, and maintains a high level of energy throughout, with director Ken Bentley and sound designer/composer Andy Hardwick keeping things varied but never letting you forget that you’re on one ship – albeit in a rather unusual way.

Peter Davison, Janet Fielding and Sarah Sutton work as well together as ever, and we get to “see” more of each one’s stronger side when they are separated for large parts of this story. Each is accompanied by a facet of robot gentleman’s gentleman Hargreaves – a nicely nuanced performance from Matthew Cottle – while the crew of the Aquitaine interact with the time travellers in many different ways, with Harry Myers’ Dr Akunin wandering into Dr Moreau territory without going over the top.

Verdict: With some seriously spooky moments, and a cleverly plotted time travel-related storyline, Aquitaine is another highly enjoyable tale. 9/10