In the second series of Primeval, Hannah Spearritt reprised her role as Abby Maitland. The actress’s enjoyment of the show bubbled through in this interview carried out by phone just after Christmas 2007, which is printed in full for the first time.

The series has been getting some good pre-publicity…

We’ve just been blown away by the natural publicity that’s happened. The TV magazines have got behind it. The first series seems to have been a success, so they are promoting it this time around as a smash hit. It’s been really cool, more than we could have asked for, so it’s been quite exciting in that respect. Obviously, to gauge how it’s going to be received this series is going to be interesting as well.

How has the show changed between the first and second years?

I think we’ve learned from the experience of doing something for the first time. Even though the Framestore guys who do the CGI had all done it before, that’s got better, because some creatures have got repeated. There are also new creatures where the CGI is completely better. We’ve all worked together before so our relationship is a lot more solid. Storyline-wise, you can take it further. It’s just a bit more risky; it pushes the boundaries more.

There’s more of a team on screen, both the characters and the actors – the sightlines are much better attuned…

That’s a really good point. Episode 1, Series 1 we were just sort of ambling through the forest, and as a team, we weren’t that well connected – just individuals drawn into this obscure situation. We were pulled by default into this team. There is a much better connection there now.

When we’re shooting CGI, because we know each other as actors, you can just feel more towards what the other person is doing. It’s become easier because you’re connected better. We can play with it more: the great thing about the CGI on this series is that we now realise that if we do something, the guys at Framestore will then work with what we give them, so we can play around a bit more. When you’ve never done anything like that before, you’re working with what they tell you they’re going to do, but then you realise that you can really make this work, so you begin to play with it. This series, we got a lot closer to the dinosaurs; there’s more interaction. We have turned that around a little bit this time. You have more fun with it because you have trust in how it’s going to look afterwards, so it’s a more enjoyable experience, as opposed to a completely scary situation that you’ve been put in.

Do you still get the moments of “What on earth are we doing”?

Not any more, really. We’re just so used to it. It’s insane. Every day is just so different in a Primeval way. There’s always something during the day that is so fantastical, because we’re put in fantastical circumstances. Through that, we’re just sort of used to it now. If it was normal, it would feel slightly odd!

That’s the good thing about the show: it’s realistic in fantastical circumstances. You treat it as normal, but there are insane things going on around us! That’s the premise of the show: that’s what we know, and that’s the beauty of it. 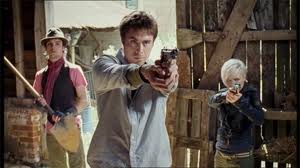 If you guys aren’t believing it, why should the audience?

We have to. We’re lucky because Douglas Henshall is such a great, solid, grounded actor. He helps me, and I’m sure other people, just by being so fantastic with the creatures, how much he really believes that they’re there. That’s rubbed off on all of us, and if we believe it, the audience will. That’s our job: to believe it.

Abby was in a bit of a triangle with Stephen and Connor; this season, she’s in a different triangle, as Connor gets a girlfriend. Is there anything left between her and Stephen now or has his revelation that he slept with Helen Cutter knocked anything on the head?

Completely. For Abby, that’s something she wouldn’t even entertain any more. Work is so important to Abby anyway. It wasn’t convenience, but Stephen was there, he looked good and everything, so she thought she might flutter her eyelashes a bit at him. But work is the number one priority for her anyway, so after the revelation that he had an affair with Helen, it was very easy for her to just go back to work. It wasn’t ideal anyway to get involved; this takes up all her time, so she’s not got time for anything else. That’s the end of that.

Then there’s the new girl, the love interest for Connor, who shows him a lot of attention. Abby begins to realise that maybe there’s something going with her feeling-wise towards Connor, but we’ll see how that develops. Their relationship gets really tested this next series and they go on a journey together. It’s quite exciting.

How does Abby feel about Connor at the start of this series?

It’s really early days for Abby and Connor. It’s one of those situations where if she did have those feelings there, they would only be brought to her attention through something quite dramatic. At that point, I don’t think she’s aware of any feelings for him; she just takes him for granted, a little bit, because she knows he’ll always be there. They’re friends: any feelings which might be there haven’t been brought to the surface in any way.

You’re involved with Andrew-Lee Potts in real life; did you keep your relationship away from filming, or did it inform the Connor/Abby relationship?

We found it terribly easy to slip into Connor and Abby in a weird sort of way. It’s bizarre: we didn’t really have to fight to stop Andrew and Hannah coming into Connor and Abby really. As soon as we were on set, it’s just what we know, because we’re so used to it. It’s just Connor and Abby. It’s weird, because the chemistry Connor and Abby have is why we have so many scenes together: it works so well on screen. It naturally stays that way, which is quite a good thing for us.

The series seems to have got bigger and better this year. Where can it go from here if there is a third series?

The writer, Adrian Hodges, has got ideas coming out of every orifice! The series can go anyway, and that’s the brilliant thing about it. It’s so difficult for me to say what sort of ideas are floating around regarding the series!

Have there been any things that have surprised you when you read the script?

I never thought Andrew would get a girlfriend! We’re often talking to Adrian Hodges, so we’re aware a lot of the time what may be on the page. When you read the script, you’re aware of the arc of where the story is going. Nothing stands out as a shock.

What was your reaction when you first saw the ARC set?

Incredible! It’s just brilliant. The building is so expensive, we couldn’t believe that they’d put the time and money into something so expensive and spectacular-looking for the show. It reminds me of 24, it’s so dramatic – all the people walking around. You’ve got a corridor off the main circular area with the gym, and the armoury. One of the days that stood out for me on the last series was seeing that for the first time. The design of it is just brilliant. It was a great base to have.

It was one of the main differences from series one: we never had a base in series one, so we were everywhere. It was nice to have that base that we always came back to. It made you feel more secure. It’s nice when you go to work to go back to the same place.

What was your favourite memory of filming this year?

Being in Canary Wharf for episode four. We did a lot of stuff on boats at night. It was so dramatic: the shots that they were getting, and the backdrop of the way that Canary Wharf looks at night were so filmic. That was really exciting, and very different to what we’d done before.

What’s next for you before series three?

I’ve got a couple of meetings, and possibly series three. Andrew and I are constantly working on a little short film together that we’ve got on YouTube, called Little Lilly – Andrew directs me in that. And lots of life stuff outside of work!

Check out the other ARChive interviews, including this piece with Hannah from the first series.