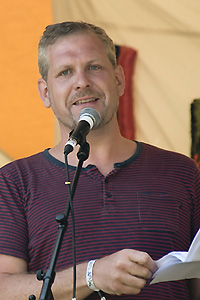 Matthew De Abaitua lived and worked as Will Self’s amanuensis in a remote cottage in Suffolk, after he graduated with an MA in Creative Writing. His short story ‘Inbetween’ was included in the bestselling anthology Disco Biscuits and adapted as a short film by Channel 4. His first novel The Red Men was shortlisted for the Arthur C. Clarke Award. In 2013, the first chapter was adapted as a short film ‘Dr. Easy’ by directors Shynola as a precursor to a feature film, currently in development. Currently lecturing on Creative Writing at Brunel University and Writing Science Fiction at the University of Essex, Matthew wrote about his former home town of Lewes in his new Angry Robot novel IF THEN, and here discusses the pros and cons of such usage…

HG Wells wrote The War of the Worlds from an ordinary terraced house in Woking, in the English home county of Surrey. Reading the novel, you can sense his relish in unleashing technologically advanced and murderous Martians upon the town. The meteorite carrying the murderous aliens lands somewhere on the common between Horshell, Ottershaw, and Woking. A chunk of the future juts out of the scorched earth of the English pastoral. The strangeness of the tripods depends upon that disjunction between deep past and terrifying future – a tall alien machine lurching through woodland.

Dramatically, it makes sense for the Martians to land in Surrey. The novel can then build toward their arrival in London, the tripods journeying from the edge of the country to the heart of empire. A movement in place provides a narrative structure, and as readers we are drawn irresistibly toward the penultimate chapter, ‘Dead London’.

For my new science fiction novel IF THEN, I chose to follow HG Wells’ example. I wanted the strangeness that comes from invading a recognisably real place with a perverse imaginative act. I wanted to turn the Sussex downland of my then-hometown of Lewes into the uncanny valley. ‘Uncanny’ is a translation of the German concept of the unheimlich. The unhomelike. The thing that is different from home but still contains home within it. 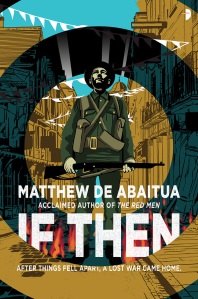 Lewes is an old town. A thousand years old. With a castle at its heart, and narrow lanes. In fictionalising the town, I retained its geography. Every town has its landmarks just as every person has hot spots in their memory; the geography of a real place can give shape to the movement of a character. The ritual of a rite of passage shows how a movement through space can express a movement through time. Space is a metaphor for time, and vice versa.

Lewes is notorious for its celebrations of ‘Bonfire’. During the festival, bonfire societies haul huge effigies through the town centre, carrying flaming brands and throwing barrels of burning oil into the river. On Bonfire Night, a society would park their barrows of fire outside my flat until the windows grew searing hot.

I took inspiration from this historical ritual to devise a ritual of the future. In my novel, Bonfire becomes Eviction Night, in which societies gather for the ritual eviction of nominated citizens by the town bailiff. Eviction Night is Bonfire rendered uncanny; instead of marking the anniversary of a failed Catholic plot to blow up the Houses of Parliament, the ritual becomes a way of coping with the losses after things fell apart.

The action of IF THEN moves from Lewes to Suvla Bay in Turkey. A hundred years ago, Suvla Bay was the site of a landing by Allied troops during the First World War campaign known variously as Gallipoli, the Cannakale, the Dardanelles. Here, the challenges of using a real-world location were much more pressing. This section of the novel is set during the landing, as the Allied forces try to ascend a forbidding mountainous ridge under fire from Turkish defenders.

From the point of view of the allied forces, every hillock and sand dune was significant. If you are under fire from snipers, without water, and being shelled, then moving a hundred yards is a big deal. As a writer, I had to study the battlefield so that my characters were equally constrained. And these conditions changed day by day, as the battle lines advanced and then retreated. I sat in the pub and, to the bemusement of my friends, hand-sketched a map of the entire theatre of war.

I mostly stuck within the tight limitations on what characters could or could not do within this landscape. The allied forces fought with the sea at their back. And so the men would strip naked and bathe and go swimming, even under the possibility of being shelled. I found that defiance fascinating.

My significant deviation was that I chose to move a necropolis, discovered by French soldiers while under fire at Cape Helles to the battlefield of Suvla Bay. It took me a while to be so bold. It was only after I wasted a day plotting how to move my characters thirty five kilometres south to the necropolis and then back again that I realised: I’m a science fiction writer. Just this once, I can make it up.

IF THEN is now available from Angry Robot. Click here to order it from Amazon.co.uk