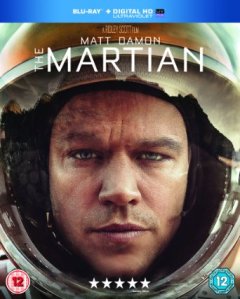 After a storm forces the crew of a Mars expedition to abort, crewmember Mark Watney is believed dead… but he has survived, and somehow has to continue to do so until help can arrive…

Having thoroughly enjoyed Andy Weir’s novel a couple of years back, I was disappointed not to get the chance to see The Martian on the big screen – but while the lack of a huge screen to watch the Blu-ray certainly removes some of the scope of the Martian landscape, it doesn’t disappear completely, and those who worked on creating those vistas (in places treating real Jordanian landscape) deserve all the plaudits that have come their way. The smaller scale does also emphasise some of the isolation that Watney feels – even if this is quite definitely not an examination of the effects of isolation on a person. The psychological tests that NASA personnel go through before they’re allowed on such missions ensures that they’re going to have their heads screwed on – as Watney himself points out to a class of cadets in the movie.

Much of what I said about the book applies to the movie, with Drew Goddard’s script following Weir’s story closer than is often the case (although one or two of the later obstacles are removed from the screenplay). Matt Damon is spot-on casting as Watney, capturing the character’s sense of humour and sheer bloodymindnedness, while Jeff Daniels and Sean Bean go head to head over how to rescue him. The depiction of the JPL and NASA headquarters may veer a little away from verisimilitude, but it works within the movie context (and, as one of the extras notes, it is 2035…) Ridley Scott contrasts the wide-open vistas of Mars with packed conditions on Earth, and the effects do their job in story-telling terms without a constant need to be flashy (the explosion of a rocket at a critical point, for instance, is seen on monitor screens rather than being front and centre as it might be in, say, a Michael Bay version of the story).

The Blu-ray comes with the requisite gag reel and behind the scenes featurettes; there are also some in-universe features about the Ares 3 mission, and, exclusive to the Blu-ray, a new “documentary”, set seven years after the events of the movie, in which Bean, Daniels and Ejiofor in character rehash the story, in the process sorting out a couple of plotholes!

Verdict: Definitely a movie to watch on the largest home entertainment screen you can, The Martian is a thrilling and believable race against time. 9/10