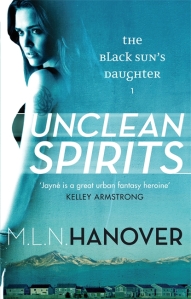 The first novel in a bold and fast-paced new urban fantasy series starring Jayné Heller, a young college student who inherits a string of houses across the world, several bank accounts, and a very unconventional business from her murdered uncle. And it turns out Uncle Eric has been fighting to rid the world of supernatural riders – demons, vampires, werewolves and all sorts of other nasty parasites – since before Jayné was born. Now it’s up to Jayné to avenge her uncle’s death and continue his mission – if she can survive her first week on the job.

Written under Daniel Abraham’s urban fantasy pseudonym M.L.N Hanover, Unclean Spirits is the first instalment in The Black Sun’s Daughter series and further proof of the author’s versatility. A first glance of the book is deceptive however, as the generic artwork, the lack of the author’s more recognisable (and respected) name and Kelley Armstrong’s prominent quote all conspire to generate a vastly misleading impression of what presides between the covers.

Rather than following a leather-clad ass-kicking weapon-wielding femme fatale, Unclean Spirits tells the story of Jayné, a high school dropout who’s just inherited her late uncle’s property, money and, as it turns out, supernatural war. In this first instalment the fight revolves around ‘riders’: spirit parasites that invade and possess human bodies. Unsure of what her role should be but with fewer more appealing career options, Jayné decides to team up with her uncle’s old workforce to defeat one of the riders key ringleaders. While she still has her ‘kick ass’ moments and does indeed wield a weapon or two, her abilities often take her by surprise and she thankfully fails to follow up any of her more successful combat encounters with cheesy one liners.

Although Unclean Spirits is written in the first person, Hanover keeps Jayné at a distance from the reader, causing her to be more affable than other urban fantasy protagonists. By not relaying her feelings, thoughts or emotions in too great a detail too quickly, the reader grows to know Jayné steadily throughout the novel, making it easier to warm to her.

Another real plus point can be seen in Hanover’s faith in his readers. Names, places and events are referred to throughout the story without much explanation, accompanied only by the implication that these things will be explained later on (which isn’t necessarily the case). The author wastes no time laying everything out, choosing rather to drop the reader directly into his world and challenging them to go with it. Such an approach makes for some seriously energised reading.

Jayné’s supernatural fighting sidekicks are all of the male variety (bar one late arrival and love triangle candidate) and all solid supporting characters. While it’s hard to believe that they know as little about her uncle as they claim too, they’re otherwise well crafted additions to the story that do more than just highlight quirks in our protagonist’s character (Midian the vampire is particularly enjoyable). That said their collective fondness for Jayné sometimes threatens to shift the novel into another genre altogether, and the romance between her and Aubrey (one of Eric’s friends) feels somewhat unnecessary and forced.

A lack of description (particularly in the supernatural department) and some questionable character relationships may bother some readers, but for most Unclean Spirits will prove an extremely fun and accessible read that may also help redefine ‘urban fantasy’ into a more universally appealing sub-genre. 8/10