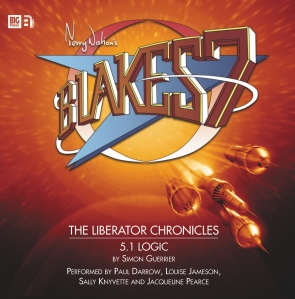 Pol’s nothing special; in fact, she’s a bit of a bore… or so it appears…

Simon Guerrier’s opening story for this latest collection of Blake’s 7 audiobook tales is one of the bleaker tales we’ve had from Big Finish in the B7 universe (despite some inadvertent ABBA references early on), and works well. Louise Jameson makes her mark in yet another franchise as Pol, who is kidnapped by Avon from her cosy life and questioned about an incident from her past.

The nature of the story demands that Pol retells the same events on multiple occasions. Sometimes the differences are minor, subtle rewordings that give a new perspective on what happened. However, as the story progresses and more is discovered, a new, and terrifying, picture starts to emerge – and an equally new and terrifying version of Pol.

Jameson’s performance dominates the audio – which is not to knock the work of Paul Darrow or Sally Knyvette as Avon and Jenna, both of whom step up their game to match Jameson. And then, of course, there’s Servalan to fit into the picture, and it’s the Supreme Commander at her most insidious. Jacqueline Pearce doesn’t have that much to say, but every single word is chilling.

Verdict: A well written and performed look at the darker side of the Blake’s 7 universe. 8/10