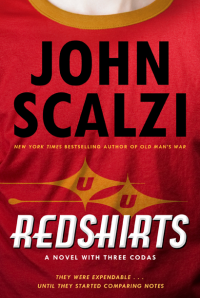 New ensigns on the Intrepid begin to realise that there’s something very, very wrong…

Think of a combination of Tom Stoppard’s Rosencrantz & Guildenstern Are Dead and Galaxy Quest and you’ve got the flavour of John Scalzi’s latest novel Redshirts – but it’s much more than that.  It works on multiple levels, extracting the mickey from some of the idiocies of the original Star Trek (the overly dramatic acting at key points, the dei ex machine solutions, the propensity of redshirts to die meaningless deaths… unless it’s important to the plot, in which case their deaths suddenly gain meaning), as well as telling a fun story of multiple realities. (Medical Chief Hartnell – Doctor Who?) It deals with predestination vs free will in a world where the Narrative is king – or sometimes, one where making a quick buck decides who lives and who dies.

And if you were to read just the main story, chances are that’s what you’ll come away with. But then Scalzi adds three codas, which give the whole book a new depth. The first deals with that old chestnut of characters “coming alive” for the author, and taking the plot in new directions – something that is key to the central story, but which causes problems for a writer who realises that he really does have the power of life and death. The second poses questions of identity, while the third is beautifully touching, and ends the book on an optimistic yet poignant note, far removed from the sometimes laugh-out-loud antics of the opening chapters.

Verdict: Scalzi does it again; not the Stargate Universe riff that some might have expected, this is a thought-provoking discussion of the nature of reality.  9/10