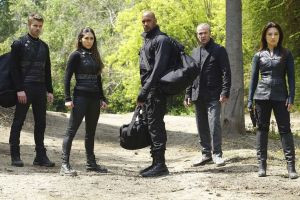 After the fast paced, action-packed drama of last episode, this instalment of SHIELD eases back a bit, giving the audience space to breathe in time for the finale. It does this in two ways – firstly, that essential ingredient which has propelled a lot of the MCU output above the competition in recent years: humour. Without being slapstick, or silly, the episode manages to get a few absurdities squeezed in as well as some great one-liners and zingers between the cast. Best of all, it doesn’t come at the expense of the second ingredient.

That ingredient is tension – and if anything the episode almost overplays this hand, layering so much portentousness on one character in particular that they may as well have just stuck a big neon flashing sign above them saying ‘watch this one, they are important’. But it’s in the blend of that sense of building dread and natural, unforced laughter and levity that the show achieves where others fall down.

Fitz Simmons share a sweet moment amid the panicked planning of Operation Last Shot at Saving Humanity where they discuss a possible romantic getaway once all the world-saving is done with. An early moment in the show gives a beautifully judged comic scene involving Fitz and – of all people – General Talbot. And Daisy, sitting alone in her confinement cell, seeing only a carefully neutral Simmons through the glass, asking the same questions to probe for answers, is as low and desperate as we have seen her to date. Not even when Ward was breaking her heart did she seem this distraught, and it adds the requisite weight and gravity which is then nicely punctuated by the humorous asides. When the team finally do storm in, all guns blazing, they do so with a surprising result, one that leads Mack and Daisy to a touching reunion as he delivers her the news. However, with that damned portentousness and that neon sign quietly flashing (to say nothing of the season finale to come) the audience is left in no doubt that this peace won’t last.

Cleverly, the show plays with that expectation, because when the shoe finally drops, the end result is one that made my jaw drop. Once again, some superb character work, and the interaction of two actors in particular makes for some compelling TV. So shocking is this final reveal that the show dispenses with a sting altogether, fading straight to silent credits as we absorb the enormity of what we just witnessed.

Verdict: A nice bit of juggling by the writers sees a slower pace and some nice bits of levity interspersed amongst the doom and gloom. It isn’t quite the stellar standard set by last episode, but it gives a nice reminder of why the MCU tends to deliver better than other similar properties, understanding that humour in appropriate amounts can still be used amongst the serious stuff. 9/10