Following the death of her mother, Cassie Blake (Britt Robertson) moves to Chance Harbour, falling in with a group of teen witches. 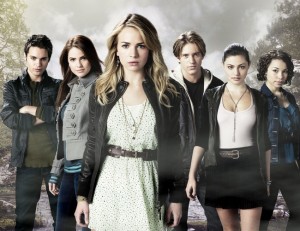 Based on a novel series by L. J. Smith, this is The Vampire Diaries (also by Smith and from the same producers) with witches. In fact, it could easily be seen as a long delayed spin-off/rip-off from the 1996 movie The Craft so similar is the premise.

Everything in this opening episode is utterly predictable, from situations to lines of dialogue—in fact, I found myself repeatedly uttering the next line before it was delivered, so hackneyed was the script.

It’s professionally put together, with distinctive characters (more like archetypes) and decent turns from Terminator: The Sarah Connor Chronicle’s Thomas Dekker and Heroes’ Ashley Crow, but it remains hollow. The spread of characters (good girl Cassie, slightly goth Faye, drunken adult with a secret Ethan) is ‘how to write a screenplay’ perfect, while the hinted at back-story seems patently obvious (and stretches back to the distant past of 1995!).

Like The Vampire Diaries, Teen Wolf and the other sons and daughters of Buffy the Vampire Slayer, this is formulaic, empty stuff, machine built to appeal to a very tight demographic.

Verdict: By the numbers TV with teen appeal, but probably lost on grown ups.