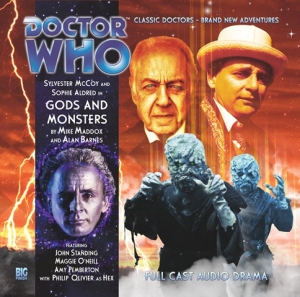 The final showdown – but who is the Doctor’s real enemy?

As Ken Bentley mentions in his sleeve notes, the word epic has got banded around quite a bit to describe this trilogy – and indeed the whole of the storyline that has built to this point. And it’s justified. The tale is told on a cosmic scale, as far from the Doctor’s normal adventures as a battle against Thanos differs from Spider-Man’s usual fare in New York City.

Audio of course is an ideal medium for this. Ironically, while Sylvester McCoy has been contributing to Peter Jackson’s huge canvas for his trilogy of movies based on Tolkien’s short children’s book The Hobbit, his ongoing stories for Big Finish have reached the level where they can convincingly create worlds like giant games, and have you envisage in your mind’s eye huge chess pieces moving around.

But as with the best Doctor Who stories, this is also a tale on a personal level; like The Curse of Fenric, it deals with questions of faith and trust, of betrayal and what you’ll do to protect the people you love. We haven’t spent as much time with Lysandra Aristedes or Sally Morgan as we have Ace and Hex, but we understand their struggle, and we can see why the Doctor chose them to accompany him. Ace gets the last word (bar the short scene after the closing credits, which, to me, doesn’t sit well with the rest of the story, although I understand the logic of including it), and that final gut-wrenching sentence, the raw emotion pouring from Sophie Aldred’s performance, perhaps expresses the feelings of a lot of the audience when they come to the end of this story. Who are the gods? Who are the monsters?

It’s not an easy tale – the CD cover warns that “defeat’s their only option” for the TARDIS crew, and it doesn’t back down on that. It’s absolutely the right one though, explaining so much of the past few years of the McCoy range. Hats off to Mike Maddox and Alan Barnes for pulling it together, and Ken Bentley for keeping it admirably clear to the listener.

But special congratulations to Philip Olivier. In many ways this is Thomas Hector Schofield’s story, and he rises to the occasion.

Verdict: The right conclusion to various threads, brought together in an epic tale.  9/10

Click here to order Gods and Monsters from Big Finish