Review: Doctor Who: Books: Time Trips: Into the Nowhere 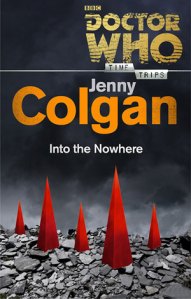 The Doctor and Clara land on a planet with no name – which holds some nasty surprises.

Jenny Colgan showed how well she had understood Matt Smith’s Doctor in Dark Horizons, her full length novel for BBC Books a couple of years back, and now she will make you wish that she was in charge of a season of adventures for the Doctor and Clara in the period between The Day of the Doctor and The Time of the Doctor. This story answers some of the many questions regarding the relationship between Time Lord and human in the wake of that epic adventure – and indeed, between The Name of the Doctor and the 50th anniversary special.

The point of view mostly switches neatly between the Doctor and Clara, but occasionally away from them both – as if the reader is watching the episode and might need guidance as to what specifically to be observing at a particular time which neither of the protagonists will choose to share. There are some distinctly horrific elements to this – in some ways this would fit neatly into the Season 13 wanderings around the galaxy for the fourth Doctor and Sarah Jane – and some visual images involving skeletons which I suspect will be haunting my dreams in the days to come.

Verdict: Colgan has referred to this as being like an episode, and the bittersweet nature of a lot of recent Doctor Who is reflected here. More, please – maybe a full-length novel? 8/10

Click here to order Doctor Who: Into the Nowhere (Time Trips) from Amazon.co.uk