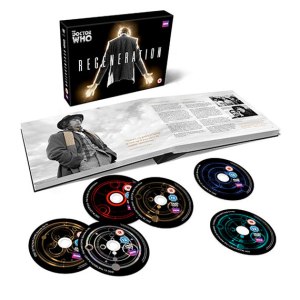 All the Doctor’s regenerations in one place…

Okay, let’s get this out of the way straightaway: The Tenth Planet part four is an animated version. The BBC has not pulled a fast one and released a recently recovered live-action episode, not seen since the year whatever. This is the excellent newly prepared edition, which has no doubt benefitted from the existence of John Cura’s telesnaps. Unlike the same company’s contributions to The Reign of Terror, there aren’t multiple close up shots of people’s eyes – there are a few but nothing like there was in that story – and the animators have stuck pretty closely to what was seen on screen. The destruction of Mondas might have had the odd extra bit put in, but that’s pretty much it.

That shouldn’t overshadow the Restoration Team’s excellent work on the first three episodes, which look so much clearer than the VHS version – which by chance I watched a few months back. Hopefully their reconstruction of part four back in 2000, incorporating the known footage, will be included on the main range release of this story, along with the information text and all the other usual goodies. Which leads to my only real complaint about this set, which is the stories don’t have the info text on them – which of course is hardly a deal-breaker since most fans will have these episodes already from the main range.

As far as the stories go, The War Games still drags occasionally, but there’s a momentum to it that I actually feel is lacking in its successor in this set, Planet of the Spiders, for all that one of the episodes is a glorified chase sequence. While War Games probably could have been told in six episodes, Spiders could cheerfully have cut back to five, or even four.

Logopolis is a dark and brooding tale of the Doctor and the Master battling over the end of everything – or is that a description of The End of Time? One of the interesting things about this set is noticing what factors are repeated from the end of each era, and which are consciously changed.

The Caves of Androzani was the last regeneration story as such until The Parting of the Ways over twenty years later – Colin Baker, of course, didn’t get one, so really is poorly represented here, with a few moments at the end of Caves, and a stand-in (Sylvester McCoy in a wig, for those who don’t know) for Time and the Rani. Eccleston’s stories (we get Bad Wolf and The Parting of the Ways) reintroduced regeneration to the show as well as a new way of achieving it. However, it will be interesting to see if events in the 50th anniversary special will alter the line-up of future versions of this set. John Hurt’s character fits in somewhere (my money is on between McGann and Eccleston), which could mean we get to see something of the end of eight and the start of nine finally.

Are the regeneration stories the best ones to put out there as a showcase for the Doctors, bearing in mind that the price of this set probably limits it to hardcore fans? If it wasn’t for the early release of The Tenth Planet, I might have had even more second thoughts about getting it, but the excellent book by Justin Richards – which doesn’t pull its punches – and the interesting photoshopped illustrations of the Doctors certainly add to its collectability.

Verdict: Pricey but a worthy addition to your collection. But do note, you will want to buy The Tenth Planet separately as well unless all you want is the story itself.  7/10

Click here to order Doctor Who: Regeneration from Amazon.co.uk