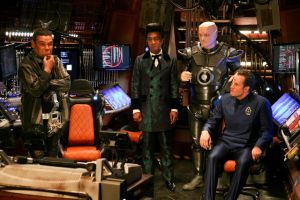 Lister has a bad time playing cards, as Kryten and Cat learn the power of coincidence.

Probably my favourite episode of the series so far, this once again has a number of laugh-aloud moments, and a throughline that sees the running joke pay off dramatically at the end of the episode.

Although it’s not overplayed, Danny-John Jules and Robert Llewellyn pull off a neat piece of double acting confidently, particularly bearing in mind it’s done in front of a live audience (I’d be interested to know if multiple takes were needed of the scene, or if they managed it in one go!) There are a number of funny sight gags, and a callback to plot elements as far back as the very first episode, as well as a reminder that peril to Lister means problems for all of them.

The scripting is sharper, with supporting characters given some good lines (the guest aliens have a backstory that skewers some of the “empire meets natives” tropes), and Kryten getting a couple of zingers.

Verdict: If the scripts can stay of this quality, then there’s a lot more life left in Red Dwarf than might first have been thought.  7/10