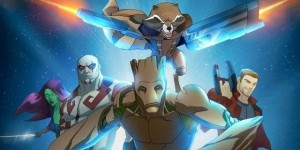 As the galaxy’s most entertaining rogues gear up for their own TV show, off the back of their smash hit movie debut last summer, Disney/Marvel treat us to a brief two-part origin story for each.

Ten short mini-sodes, each roughly two minutes long, introduce us to the five core characters of the series, giving us the kind of origin information that the movie lacked, such as exactly how Rocket came to be, while also giving us an idea of what to expect from them all in the animated series.

Each character gets their own two-parter, the general theme being of a first episode that deals with the backstory of the character and leaves the viewer on a cliffhanger, and the second a resolution of the cliffhanger followed by a general setup of where the character is going.

It treads a fine line between the movie and the comics which originally inspired it, drawing elements from both. Movie fans will instantly recognise the look of each character, while those who have delved into the comics will find plenty of nods to that wider lore.

There are interesting choices – we see what happens immediately after Peter is abducted as a boy by Yondu, witnessing exactly what it was that made the Ravager leader take to his young bounty, before ending on the pair of them engaged in nefarious deeds in the ‘present’.

Rocket is introduced alongside Groot, their two stories dovetailing together nicely and explaining the origin of their friendship, with Rocket taking narration duties for his limited pal.

Drax’s two parter represents the biggest divergence from both movie and comics, getting the basic notes of the character spot on while making him easier for a younger audience to understand and sympathise with. His final destination at the end of his second episode suggests that the initial meeting of the whole gang will likely be not all that dissimilar to the movie.

Finally we have Gamora, on a mission for Ronan with her sibling Nebula and another familiar character who it turns out is also a ‘sibling’ (presumably adopted by Thanos as well). This is an odd one, placing the cartoon firmly at odds with the movie whilst at the same time setting up said character for the role he occupied in it, and suggests most strongly of all that rather than following either the movie or the comics, this series will tread its own separate path, borrowing elements from both for convenience.

Whatever your position – casual movie fan or hardcore Guardians nut – there is plenty here to whet the appetite. If this is the standard we can expect from the series itself, then it seems we have every reason to be excited.

Verdict: A solidly intriguing introduction to the characters, setting up what promises to be another Marvel success. 8/10