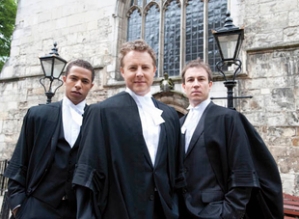 Some shows take a bit of time to find their feet, and decide on the filter through which they’ll tell their stories – sometimes episodes can come across as “Show x does film y”, where the beats of the source material are used for the new series, even when they don’t fully fit into that set up. Unusually, Eternal Law seems to have overcome that difficulty very quickly.

Yes, there are moments when this feels a bit like Kramer vs Kramer, but every part of the episode stays true to the situation that Pharoah and Graham have created. This may not be a good thing to everyone’s mind: Eternal Law, with its scenes of angels sitting atop York Minster and discarded wings found locked in a trunk isn’t going to follow the rules of normal procedurals.

For those who were bemused by the opening episode, a lot more is explained this week – more, perhaps, than you might normally expect at this stage in a six-part serial – but we do gain a deeper understanding of the characters, especially when it comes to Zak’s highly conflicted feelings towards Hannah that tend to come out at the most unfortunate times.

Verdict: Like the opener, this won’t be to everyone’s taste, but for those who buy into the premise, it’s starting to show what the series can do.  7/10

<<< Part 1 of our interview with Matthew Graham

Part 2 of our interview with Matthew Graham (discussing this episode)>>>