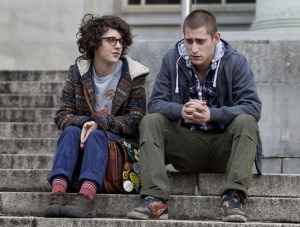 Love is in the air for the inhabitants of Honolulu Heights…

If transmission of series four had begun at the start of January, this episode would have coincided with Valentine’s week, and it would have made for a very suitable rom-com with a Being Human twist. There’s plenty of humour throughout the episode, deriving both from the guest stars and from the lead characters, and some touching moments, particularly for Michael Socha, who gets a chance to demonstrate why he’s being touted as a real name to watch at present.

Unlike some episodes of the show, this is a true ensemble piece. Each of the trio has their own thread – even Annie, who gets to be more than comic relief and babysitter – and we also get some forward movement on the ongoing vampire/werewolf war. One particular new character has a very specialised manner of communicating, and no doubt there’ll be an online guessing game as to where he derives his dialogue from!

After some initial reservations, I’m beginning to warm to the character of Cutler, who gets some great moments in this episode. It would be nice if, for once, a nemesis for the team manages to survive the closing episodes of the season. However, things are clearly going to be hotting up, given some of the scenes in the throwforward to episode seven…

Verdict: A great piece of Being Human: funny, tragic, and above all, real in the way it treats emotions.  8/10