Merlin: Review: Series 1 Ep 8: The Beginning of the End 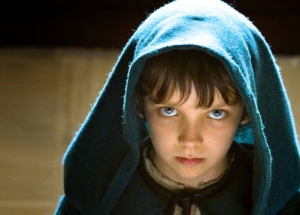 When Morgana helps Merlin protect a young druid from discovery, it starts a chain of events that will have major consequences for Arthur and Merlin…

Don’t be put off by the rather pretentious title for this episode: it’s one of the best of the series to date. And if you’ve got any Arthurian knowledge (or even remember the Doctor Who story Battlefield), don’t look at the cast list in the Radio Times, which gives away the big end-of-episode reveal!

Morgana takes her life in her hands to help the young boy druid, playing on the love displayed to her by Uther – which leads to one of the more shocking scenes between the two of them. For the first time, Merlin is faced with a really difficult dilemma, and it’s a credit to the direction and playing that you really don’t know which way he’ll jump: whatever decision he makes, he loses. It’s not helped by the dragon (who gets two appearances this week!) actually refusing to talk in riddles, and making it clear to Merlin that what seems right is wrong.

There’s some humour, but overall there’s a dark tone that suits the series well. 8/10