Arthur (Jamie Campbell-Bowers) interferes in the life of a local village, Morgan (Eva Green) begins to build a power base among the country’s merchants, while Merlin (Joseph Fiennes) recovers from his use of magic… 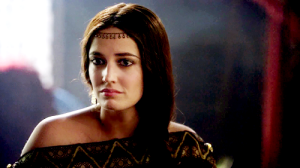 Despite being a ratings hit, Camelot has been cancelled due to “significant production challenges” (widely assumed to be actor availability), making these 10 episodes an inadvertent mini-series rather than the first season in an on-going narrative.

It’s a shame, because while still full of faults, Camelot is beginning to find its feet a little. The beginnings of a form of medieval class war seem to be being laid as Morgan builds alliances with the merchant class, while Arthur puts himself on the side of the peasant when he gets involved in a local dispute.

Interestingly, Arthur has no problem overturning the village head man’s ‘droit de seigneur’ when it comes to the village women when he himself seemingly exercised the exact same ‘right’ over Guinevere (albeit with her complicity) on the night before she married his ‘champion’!

it’s becoming monotonous, but once again the episode is stolen by Green’s mad-eye-rolling performance as the demented Morgan and Fiennes’ bonkers Merlin, even if he is a little side-lined from the action here. Unfortunately, guest stars Liam Cunningham (trying to make up for the awful Outcasts) and Steven Mackintosh don’t make much of an impact.

Verdict: Slowly getting better, it’s a shame Camelot‘s longer-term narrative threads will now not be resolved.