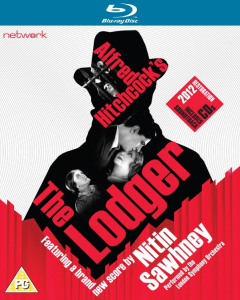 A serial killer is on the loose in London, murdering blondes on Tuesday nights. Is the mysterious Avenger lodging in the house of a young model and her parents?

One of Alfred Hitchcock’s earliest films is given a magnificent overhaul, and an intriguing new soundtrack in this Network release. It features many of the Master’s favourite tropes – blondes in peril, an innocent man on the run, symbols on screen matching the themes of the piece – while lacking some of the ambiguity and flair that he would develop through his career.

This is the silent version of The Lodger (star Ivor Novello reprised his role in the talkies version a few years later).There are some amazingly hammy moments from Novello – his introduction, when he widens his eyes as if he’s just seen some huge monster materialise behind the woman he’s speaking to, is just one highlight – and some mugging to the camera from some of the other actors, but Hitchcock creates a very realistic world, emphasised by the early sequences in which we see the 1920s version of 24 Hour News.

The new score by Nitin Sawhney has some surprising moments: the first proper meeting between the heroine and the Lodger has a musical accompaniment that perhaps takes you out of the film when you first see it, but on rewatching it makes perfect sense. It doesn’t try to underscore every single emotional beat, but creates a mood that matches what Hitchcock was doing on screen, sometimes bringing out a bit more of the humour of scenes than you might anticipate. The restoration shows up detail that has been lost over the years (just look at the print that’s been uploaded to YouTube!) with the blue and orange shadings turned up to emphasise their effect.

It’s a different sort of serial killer film: it almost has a Rosencrantz & Guildernstern Are Dead effect, with characters who would be bit players in the true shocker (the cop with the hunch about the lodger at his girlfriend’s parents) moved centre stage.

Verdict: One for fans of Hitchcock and suspense films, and an object lesson in how you don’t need gallons of blood to achieve terror.  8/10