Review: Doctor Who: Series 7b Episode 8: The Name of the Doctor 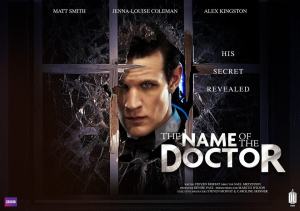 There’s understandably been a lot of hype about this series finale for Doctor Who, particularly when it was revealed that the final scene was being kept from all preview copies, as it led into the 50th anniversary special, coming later this year.

The opening, although we don’t realise it to begin with, is a flashforward to events later in the episode, with a mix of incredibly good and not so brilliant incorporations of Clara into the events of the previous Doctors’ lives (a trick then repeated later in the episode with the Great Intelligence). The combination of actors in the costumes and old footage sells the effect well – the Troughton footage had me laughing aloud – and for the first time we get categoric, canonical proof that the Doctor left Gallifrey with Susan (and hopefully there’s time for that to be incorporated into Big Finish’s telling of that portion of history).

There are a couple of places where the pacing is a bit off – the conference call seemed to take just that bit too long to kick off, and Clara’s decision to enter the timeline also felt slightly delayed – but overall from start to finish, the episode delivers. Strax is suitably humorous, making his reversion to type all the more effective; the device over the name of the Doctor is handled well – and River’s final moments have been some time coming, but end as they absolutely had to. You can complain that Moffat is reusing some of his own ideas again, and there are elements of The Pandorica Opens/The Big Bang to this finale, but the episode also had to put things into place for the final story.

And so we get the big scene inside the Doctor’s timestream where the eleven Doctors and one other are moving around. There’s already been reference to the Valeyard in the episode; is Hurt’s Doctor another aspect of that character? Is he the version of the Doctor who used the Moment at the end of the Time War (and the inference is that this is a version who’s existed prior to Matt Smith, making it more likely to be him than the Valeyard)? Let’s be honest: fans are going to cover every feasible possibility over the next six months and five days… !

Verdict: It’s what fans have been waiting for and sets the stage for some real fireworks come November. 9/10