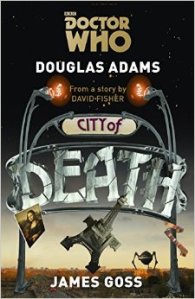 I would hope that a large number of readers of this site will know the provenance of City of Death – those who do, skip to the next paragraph now. For those for whom this might just be “another Doctor Who story”, this is the serial from the classic show that achieved the highest ratings of the 20th century incarnation (albeit helped by a strike on one of the only other two channels), penned by the Hitchhikers’ Guide to the Galaxy creator Douglas Adams from a story by David Fisher. The TV version has Tom Baker at his peak, partnered by Lalla Ward as Romana, helped (to an extent) by Tom Chadbon’s Bulldog Drummond-ish detective Duggan, battling Julian Glover as the suave and sophisticated Count Scarlioni, who is in fact the last survivor of an alien race. Filmed on location in Paris, it has a joie de vivre that epitomises the fourth Doctor. However, unlike the vast majority of the stories from that era, it was never committed to deathless prose in the Target range.

Thirty five years after the serial first aired, James Goss has brought it back to life in this excellent adaptation. Like Gareth Roberts’ Shada three years back, it would be unfair to describe this as a novelisation (even if that’s technically what it is): Goss has taken Adams’ work, including various alternate versions, sprinkled in some more of Fisher’s original story, and created a novel around the same events. He’s managed the incredibly difficult balancing act of emulating Douglas Adams’ writing – his humour as well as his insight into humankind – without making it a pastiche. Goss acknowledges in his afterword that he freely made use of some of Adams’ more intriguing stage directions from the script, but there are plenty of places that must come from Goss’s own fertile imagination – yet none of it jars. (An aside, for example, about Daleks and a chivalric order still makes me grin when I think about it.)

Goss also addresses some of the frequently-raised problems with City of Death (in particular exactly why the episode 1 cliffhanger happens as it does), and comes up with viable explanations. He seeds various themes through the novel to pay off towards the end – and yes, the scene with John Cleese and Eleanor Bron now makes sense! And he incorporates Paris as a character in its own right within the story – appropriately enough, given its title (or the first part anyway).

Click here to order Doctor Who: City of Death from Amazon.co.uk