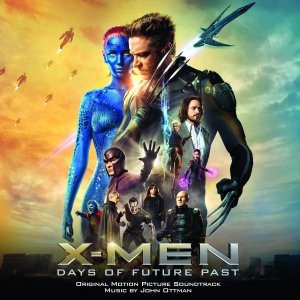 Just as director Bryan Singer has returned, along with stars Patrick Stewart and Ian McKellen, for the newest X-Men movie, so the composing duties have returned to the hands of John Ottman, who previously scored X2.

Unsurprisingly, therefore, the main theme is a reworking of that for X2, and there are various other little callbacks to that score throughout.

Much of the score is quite listenable on its own, with Xavier’s theme (“Hope”) and related telepath-music coming off the best. The action cues are more of a mixture, however. The “Saigon” track, for example is somewhat discordant, not in a way that works as listening material in its own right, while various other action cues are mostly repetitive rhythms that, while doubtless fitting with making the audience’s hearts pound in the cinema, don’t really make for a concert.

And yet, there are also tracks that do. “Paris Pandemonium” and “Time’s Up”, for example start with those kinds of discordance and unimaginative action noise, but then switch into much cleverer passages part way through, ending up quite thrilling. The former also makes much use of the foghorn like “blaster” tone used in a lot of movie trailers over the past few years. There’s also good use of some vocals, some of which is reminiscent of Tyler Bates’ score for 300, and some of which sounds suspiciously like it might be in Klingon…

The album also includes two 1970s songs used in the film – Jim Croce’s “Time In A Bottle” and Roberta Flack’s hit version of “The First Time Ever I Saw Your Face”.

Verdict: A reasonably solid and effective effort, but not especially noteworthy (if you’ll pardon the pun.) 7/10