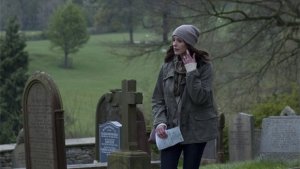 The second part of this adaptation of the James Herbert novel keeps up a relentless pace, as things get worse in both timeframes. The revelations about Maurice’s relationship with Cribben’s sister Magda add another horrific element to the situation, and the way that Nancy discovers that is nicely underplayed by all the actors involved.

Crickley Hall may invoke a lot of the clichés of the genre – disagreements over what to do, characters haunted by their past actions, rational explanations propounded but undermined by events – but this is given a credibility by the strength of the cast. Suranne Jones and Tom Ellis spend most of the episode at loggerheads, and the moment when Gabe declares that their son is dead, and Eve looks searchingly at him then realises that she is on her own is very affecting.

Less is definitely more as far as Douglas Henshall’s Cribben is concerned, and all we need to hear is the swish of the cane to know that he’s somewhere near: as Joe Ahearne points out in his interview, sound is very important in ghost stories, and, apart from one rather odd effect for the bar hitting Nancy, the soundscape in this is very well put together.

Verdict: A growing sense of dread permeates the episode, putting everyone in place for the conclusion.  7/10

Read our review of episode 1 here

and our interview with adapter/director Joe Ahearne here