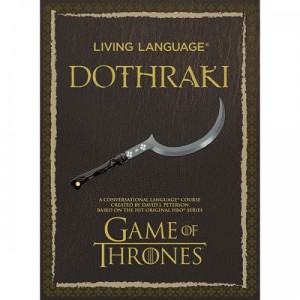 Conversational Klingon has been around for some considerable time (and of course, fluent knowledge of it forms part of the default media stereotype of a genre fan), and there have been various attempts to create other complete languages for films and TV series. Sometimes specific words (e.g. “frel” from Farscape or “frak” from Battlestar Galactica) can enter more common usage, but there aren’t that many successful additions.

Given that apparently 146 girls were saddled with the name Khaleesi in the US during 2012, maybe Dothraki will be different, and this Living Language course (with its indispensable CD to aid with pronunciation) is a great way to start. The course, by David J. Peterson, is exactly what you’d expect in terms of the format – start with the basic sounds, then add vocabulary, grammar and context as you get more familiar. There are lessons and tests, and a guide to all the useful insults and horse-related terms you might expect from the Dothraki.

If you’re a natural linguist, Dothraki will probably come quite quickly: according to HBO, Peterson built the language from Turkish, Russian, Estonian, Inuktitut and Swahili as well as the words George R.R. Martin provided in the novels. I won’t be in the least surprised if some of the vocabulary created for the show works its way into the next book in the sequence – whenever that may appear!

Verdict: Maybe not quite as much use in the global business market as Mandarin, this is an enjoyable way to immerse yourself more fully in GRRM’s world. 7/10