Apart (Of Me) Part Two

“I thought I could give you the life you’d want if you hadn’t spent the last however many years saving the world.” – Andrew

As if Buffy hasn’t suffered enough identity crises in her life already, torn between the cheerleader airhead she was and the mystical defender of the world she was chosen to be, to find out she’s had her consciousness transferred into a robot must seem like the final straw. To make matters worse, her body (blissfully ignorant of her real identity) is living the perfect suburban life that slayer Buffy can only dream of.

Sometimes I wonder what is ultimately going to become of the original three characters from BtVS. Buffy seems weary and filled with despair most of the time. As an adult she seems no closer than ever to being able to have some semblance of a normal life. Alienated, alone and incapable of having a career or relationship, she seems destined to a bleak existence.

Meanwhile, Xander seems to grow more bitter and angry with every issue. Gone is the joking, easy-going boy of the television series or the early issues of Season 8. Now he is a scowling man who snaps at Dawn and resents the vampires and demons who plague all their lives.

Willow has dropped out of the story entirely in recent issues as she struggles to find herself again now that magic has gone from the world. However she does have her own mini-series starting in November so it will be interesting to see where that leads… 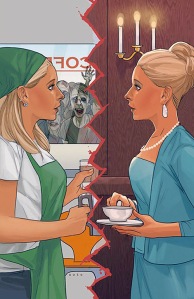 Anyway, this issue charts the fallout from Andrew’s ill-conceived plan to keep the ‘real’ Buffy safe. Buffy’s enemies are finally catching up with her but unfortunately the ‘her’ they catch up with is convinced she’s a mild-mannered, middle class professional with a love of Ikea décor. While robot Buffy, Spike and Andrew attempt a rescue of her alter ego, things take an unexpected twist.

This arc, like so many, continues to delve into the dichotomy between who Buffy envisioned herself as and the reality of her life. Buffy has always felt a certain resentment of her slayer duties and now, even with no magic and a plethora of other slayers, she is still unable to have the life she wants. Having that life shoved under her nose is a painful shock. It will be interesting to see how all this unfolds in upcoming issues.  8/10