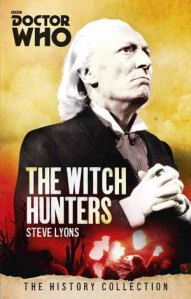 This latest set of reprints from the stories that delighted us fans during the show’s long hiatus between 1989 and 2005 draws from the Virgin New and Missing Adventures as well as the BBC Past Doctors lines (plus a couple of the New Series Adventures), and perhaps demonstrates just how little the Missing and Past Doctors stories in particular differed.

Taking them in chronological order of Doctor, Hartnell’s incarnation is represented by Steve Lyons’ The Witch Hunters, a story that was referenced in William Russell’s introduction in character as Ian Chesterton to The Crusade video (which can now be found on YouTube). Lyons draws the reader into the period, and there’s some nicely drawn characterisation of the first TARDIS team, as well as a brief throwforward to The Five Doctors.

Troughton battles The Roundheads in Mark Gatiss’ tale, which is about to come out as an unabridged reading by Anneke Wills. Having proofread an earlier version of this back in the day, it was interesting to read the final book for the first time, and, as you might expect from Gatiss, it’s a strong story that captures the setting and the characters.

David Bishop’s Amorality Tale sees Pertwee’s Doctor and Sarah back in London of the 1950s. This is one that doesn’t hold up as well as some from that range, and it doesn’t help that the period isn’t perhaps the most interesting to visit. It’s a shame that Bishop’s much stronger historical, Who Killed Kennedy couldn’t have been reprinted instead. (You can download a copy here though.)

Tom Baker’s Doctor is represented by Gareth Roberts’ The English Way of Death, which has just been adapted by John Dorney for Big Finish – which means most people coming to it will know the plotline, even if details differ. Roberts’ prose is at its best here and you’ll probably find yourself laughing out loud at the antics of the Doctor, Romana and K9. 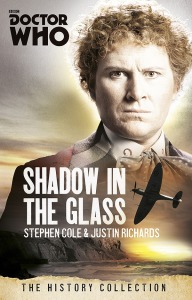 Peter Davison’s Doctor is conspicuous by his absence: although there weren’t that many Fifth Doctor historicals, the precedent for reprinting one of the Target novelizations was set with Remembrance of the Daleks, so one of Terence Dudley’s books would have been great to see back in print – my vote would have been for The King’s Demons.

Colin Baker teams up with the Brigadier for The Shadow in the Glass by Steve Cole & Justin Richards, which I remember loving at the time, and still do now. Both authors have subsequently dealt with similar periods in their writing – Richards with his Never War saga, Cole slightly earlier with his Young Bond books – and this is a romp with some incredibly serious moments.

Paul Cornell’s seminal New Adventure Human Nature is the Sylvester McCoy entry. Put simply, if you’ve not read this, then get a copy now – it shows the strengths of the New Adventures line, and, for my money, holds together better than the 10th Doctor TV version. It’s some of Cornell’s best writing for the ranges and deserves all the praise it’s had over the years.

There’s nothing for Mr McGann’s Doctor either, which is another shame. Justin Richards’ The Burning would probably have been out of consideration, but I wouldn’t have minded seeing how Mike Collier’s The Taint or Paul Leonard’s The Turing Test were received by contemporary audiences. Nor does Chris Eccleston’s Doctor appear – maybe this would have been an opportunity for a new 9th Doctor novel? It would certainly have given the range an extra appeal. 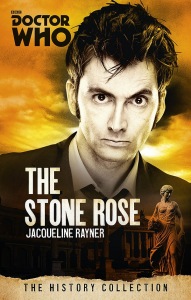 David Tennant’s reign is well-recreated in Jac Rayner’s wonderful The Stone Rose, a novel that my daughter has read and reread repeatedly. The books were shorter by this point, but this is one of those stories that you wish had been televised.

The range is completed with James Goss’ Dead of Winter. Like his recent The Blood Cell, this presents us with a different view of the Doctor and his companion(s), and in common with some of his Blake’s 7 audios for Big Finish, there’s a darkness at the heart that will leave you pondering afterwards.

Verdict: If you’ve not read them, then take this chance to enjoy some classic Doctor Who tales.