Good Omens: Feature: In the Studio 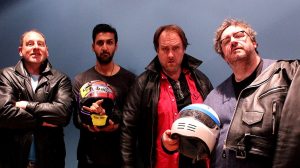 Back in September, Sci-Fi Bulletin’s Paul Simpson was invited to one of the studio sessions for the recording of Dirk Maggs’ adaptation of Neil Gaiman and Terry Pratchett’s Good Omens.

It’s a mild autumn afternoon, as I arrive at the Maida Vale studio where Good Omens is being recorded. There’s an extended green room, with actors milling about in the foyer of the studio (where a banquet of food is rapidly being depleted), and in the corridor leading to the recording area. Some are studying scripts, others catching 40 winks, while there are those who take the opportunity for a good catch-up (and, it has to be said, gossip – one of those occasions when you follow the good advice given by Patrick Troughton’s Doctor: keep your ears open and your mouth shut). 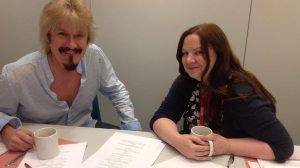 In the control room of the studio, all is briskly efficient. Directors Maggs and Heather Larmour – who worked together on the highly successful version of Neverwhere – sit behind a large desk, while engineer Wilfredo Acosta mans the sound desk that sits between them and the glass that separates the studio from the control room. In pride of place in front of Maggs is a much-battered and well-read copy of the original paperback edition of Good Omens, something which is referred to as and when necessary – particularly if one of the actors queries something about the reading of a line.

In the studio, the Four Horsepersons of the Apocalypse are recording a scene for the final part, and Maggs guides them through a quick rehearsal before they go for a take. Rachel Stirling, as War, wonders whether a different vocal tone might be preferable, and Maggs and Lamour are happy to oblige with a take – which version that makes it to the final broadcast is revealed on Saturday afternoon. 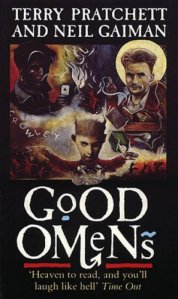 Once their scene is over, it’s time for the studio itself to be reset. For Big Finish recordings, the actors perform in separate sound booths, and hear what’s going on via headphones, connecting them to each other’s performances and the director in the control room. For BBC productions such as this (or The Once and Future King), the actors are in a much larger area, where they are able to move around. For the scene that’s about to be recorded, set in a café, there are tables and chairs in the appropriate spots. It’s the moment in part 5 where a group of bikers gather round a quiz machine, and discover that the questions are getting increasingly unusual as the Horsemen gather. The actors are indeed placed in position as if they’re staring over the shoulder of someone hunched in front of the machine, although Jim Norton, playing Death (who’s eventually revealed to be the person getting the answers right), is actually over at a separate microphone, together with the other Horsepersons as required.

It takes some time for everything to be put in place, which gives time for Ken Humphrey to take some photographs of the Bikers complete with props (including a hastily borrowed leather jacket from Sci-Fi Bulletin’s reporter!), and for a discussion of the finer points of the road surface sound of the M25, something which will be important for the underlying sound in the sequences to be recorded later that afternoon. Once everything is ready, there’s a run through, and a chance for Maggs and Larmour to experiment with the different accents adopted by the Bikers, as well as the positioning of the actors. Once the directors are satisfied, the various sections are recorded.

Click on the part number below for our review: