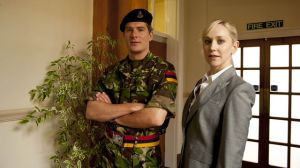 Zak and Hannah defend a soldier accused of attempted desertion…

One of the strongest episodes of the series, this demonstrates the potential that Eternal Law has, combining a present day legal battle, the temptation of both Tom and Zak – and even Mrs Sheringham, via what she thinks is her dead husband – and a reminder of the documented sightings of angels over the years. The revelation that Zak was the Angel of Mons is handled in a very respectful way (tonally, it could easily have gone very wrong), and Mr Mountjoy’s revenge on him for interfering in such a way is totally in keeping with the vengeful God that has underpinned this series.

Of course, it’s as implausible as ever: how did Tom get into the Army base to have a face off with Sophie in the first place? If he simply appeared there, then why doesn’t he do the same thing once he’s out of sight of his pursuers? Obviously, the answer is that it wouldn’t set up the situation at the end where all the various plot threads surrounding the court martial come together, but it’s annoying to see this sort of plothole that could easily be dealt with via a single line of dialogue… After all, the jeopardy of the bomb situation is set up in such a way!

Verdict: The ratings would indicate that Eternal Law hasn’t found favour with audiences, which is a shame, because episodes like this show what it could have been.  7/10