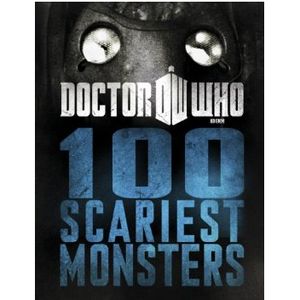 A rundown of some of the Doctor’s most terrifying foes.

Yes, it’s yet another revamp of the old Doctor Who Monster Book idea from the 1970s, suitably updated for the 21st Century and the 11th Doctor. Each of the monsters is given a double page spread, featuring a brief description of the Doctor’s battle(s) against them and which Doctor was involved, as well as a “fear factor” out of 10. Not everyone is going to agree with Justin Richards’  marks but on the whole they’re pretty uncontroversial.

With 100 monsters to choose, the classic series is better represented here than in many Who items of late, and unlike the postcard collection, there are shots from across the Doctors: Hartnell with the War Machines and the Zarbi; Troughton with the Ice Warriors;  Pertwee with the Sea Devils, Draconians, and Spiders; Tom Baker with the Kraal, the Krynoid and the Ogri; Eccleston with the Autons and the Jagrafess, and numerous shots of David Tennant and Matt Smith.  (Probably nothing should be read into the lack of JNT Doctors – the Terileptils, Sil and the Haemovores represent their eras).

The design works well, apart from the very opening spread, where the text vanishes into the blackness, and if there is a logic to the order of appearance, it’s escaped me!

Verdict: One of the better tie-ins. Recommended for younger fans who are venturing into the classic series via the DVDs.  8/10