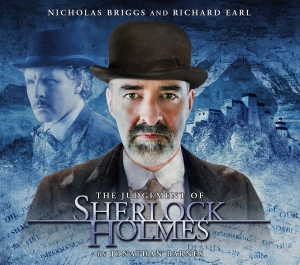 Nearly thirty years after the event, Holmes finally tells Watson what happened during the years that he was missing, believed dead, reviving memories for the doctor of a terrible period in his own life…

Rather than the four discrete but linked tales that formed The Ordeal of Sherlock Holmes, Jonathan Barnes has given us one epic length adventure in this new box set, which picks up a few months after Holmes apparently died at the Reichenbach Falls. Watson knows that his best friend is dead, even if there are many others who cannot bring themselves to that conclusion, and is trying to get on with his life with his wife Mary. Holmes meanwhile is travelling, on the trail of Moriarty’s chief henchman, Colonel Sebastian Moran. But there is a devilish scheme afoot, one which embroils Watson, Mycroft Holmes, Mary and Lestrade in Great Britain, and Sherlock in far-off Tibet.

By the very nature of the time period that Barnes is chronicling, this is not a standard Holmes and Watson adventure, although there are some scenes (set in 1921) in which the old friends are together – they’re short, comparatively, but they have the emotional core of the story at their heart. Holmes without Watson is a very different man; but so is Watson without Holmes – there are moments in this which make difficult listening, but both Nicholas Briggs and Richard Earl carry them off totally credibly. Both men have new confidants in their adventures: Sherlock has the enigmatic Dorje to give him advice and solace as he deals with the equally enigmatic Mrs Helena Eidelmann; John confides in Mary, as well as Lestrade and sometimes Mycroft.

There’s always the risk of an element of hubris about trying to fill in the gaps in the chronology of well-loved characters – Saint fans have never learned why Simon Templar split up with his long-term love; there were many who believed that we should never have found out what the Doctor did in the Time War. Therefore, adventures set during this period of Holmes’ life have to be something special – probably the most famous previously, Nicholas Meyer’s The Seven Percent Solution, teamed Holmes with Sigmund Freud – and Barnes and the team have stepped up to the mark. There are all the red herrings and false trails that you could want, a plot that’s predicated on the mores and expectations of the time, tantalising hints about other adventures for which (no doubt) the world is not yet ready, even more tantalising hints about Holmes’ childhood (and yes, the comments to Holmes’ father Sherringford regarding paternity were noted for future reference), an attempt to straighten out some of Conan Doyle’s accidentally convoluted chronology with regard to Watson’s private life, and, perhaps most importantly, a set of villains who match, if not exceed, Moriarty as foes, who know our heroes’ weakest points and aren’t afraid to capitalise on that knowledge.

Director Ken Bentley has assembled a very strong cast alongside Briggs and Earl – who both excel in this, displaying passionate sides to their characters that shake the speakers. John Banks as Lestrade and Tim Bentinck’s Mycroft are great foils for Earl, while Gemma Whelan gives us a very feisty Mary Watson; Jemma Churchill, Terrence Hardiman, Nicholas Chambers, Joannah Tincey, Dai Tabuchi and David Killick all play to the melodramatic nature of the story without ever letting it go over the top (I’m deliberately not talking further about their characters so as not to spoil the many twists!). There’s a cinematic scope to the story, and Jamie Robertson’s sound design ensures that even with the quick cutting that the script requires, we’re never unsure where we are (unless that’s the point!).

Verdict: Another triumph for Briggs, Earl and the team. 10/10