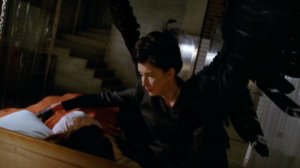 Although it starts and ends with the usual hysteria, this is a more considered, quietly dramatic episode of American Horror Story, and thoroughly enjoyable albeit in a very different way from the full-on Nazi doctor-mutant in the basement storylines. There’s enough gore in the fate of Grace and guest-character Miles (who has an unfortunate encounter with a meat slicer) at the opening, and the mutant monster attack on Kit and Grace at the episode’s shock conclusion.

The linking factor between the quieter disparate character stories is the appearance of the Angel of Death, played by last season’s co-star Frances Conroy. She appears to those facing (or in some cases inviting) death, taking their souls with a kiss. She’s also recognised by the demon/devil controlling Sister Mary Eunice as a ‘cousin’ (giving the episode its title). This full on supernatural/theological discussion does much to fill in the previously more ambiguous status of the possessed Sister. The brief moment when she escapes the demon’s control is truly chilling…

The core of the episode, though, is once again Jessica Lange’s Sister Jude. We see more of her back-story through some wonderfully atmospheric 1940s set scenes. It’s a two-hander between Lange and Conroy, as the Angel of Death gives her a reason to make peace with the parents of the girl she apparently killed in a hit-and-run incident 15 years before. Things, however, turn out not to be as they appeared to her at the time.

This is a brilliant scene. crackling with dramatic energy, much of it a characterful monologue delivered by Lange, with occasional, but pivotal, interruptions from Conroy. It shows that this often over-the-top show can do quiet and meaningful, as well as grand guignol gore and chaos.

Verdict: Brilliant performances give life to a great script by Buffy’s Tim Minear.