Review: Doctor Who: Books: The Classic Doctor Who DVD Compendium 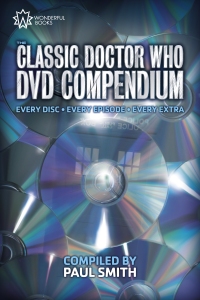 There are projects which go from being a labour of love to being almost an obsession, and I suspect that this incredibly detailed book is something of the latter for Paul Smith. Starting with a close look at the technicalities behind the filming of Doctor Who – all information which you need to understand the problems faced by the members of the Restoration Team on the various stories – the main body of the text is an alphabetical trawl through each and every DVD released by the BBC/2Entertain featuring a classic Doctor Who story. This includes an entry for each box set – such as The Beginning or Ace Adventures – which gives the relevant release details and then sends you off to the correct entries for the discs themselves.

Smith doesn’t just give details on what’s on the DVD special features – he also provides a critique of the episodes themselves, as well as a list of “connections” for each story, so if you’ve liked one particular element (actor, enemy, shade of the colour blue used), you can find out where they turn up elsewhere. Confining this purely to the stories that do exist visually means that we don’t get to hear his opinions on, say, Marco Polo but the number of people who genuinely remember that on screen and can pass judgement on the full story are now extremely limited.

The appendices at the end are possibly the most useful part of the book, detailing such things as the Easter eggs on the discs, and the DVDs which were released outside the United Kingdom – including I Dalek Invadono la Terra, an Italian set which didn’t just have the obvious title story, but also The Aztecs and The Web Planet. I’d love to see a review of that and see what fans used to the Tennant series made of such televisual antiquities!

Much as a hard copy of this would be fun to leaf through, I suspect the ebook version will be more popular, given the search facility available. If, like me, you’ve got the classic DVDs in order on the shelves, this will be an invaluable guide.

Verdict: If you’re a classic Who fan, this will be a very useful volume indeed. 9/10

Click here to order The Classic Doctor Who DVD Compendium from Amazon.co.uk