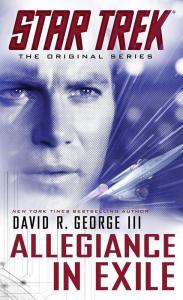 Back in the mists of time, Pocket Books gained the Star Trek licence, with Vonda N. McIntyre’s The Entropy Effect forming their first original novel. One of its subplots featured Hikaru Sulu considering leaving the Enterprise (although that subplot was a casualty of the severe editing process required for the 90 minute audiobook version). In the novel, McIntyre gave us a lot of information about Sulu (including his first name) that was later either canonised within the movies, or became the basis of the novel lines’ handling of the character.

David R. George’s first return to the original series since his brilliant Crucible trilogy back in 2006 covers much the same ground, but in nowhere near as entertaining a manner. George’s Sulu at times feels as if he’s channelling actor George Takei’s feelings of resentment towards William Shatner, with some of his actions and reactions in the second half of the book out of character. Frankly, the story would have been better served if George had handed the storyline to one of the less well-known crewmen, such as Ensign Walking Bear from the animated series, who gets a mention in passing.

Before we get to that character misfire though, we get a tedious first half where every single piece of tech, Starfleet routine and character interaction needs to be explained as if to someone who has never seen Star Trek before. Whether this is something that George was asked to do editorially, or was his decision, it’s a mistake. Much as I love them, and have collected them since the early Corgi/Bantam days as they’ve appeared, these are not books that appeal to a mainstream science fiction audience, and people are not going to pick up a book with a picture of Shatner (rather than Pine) on the cover out of a vague interest in Star Trek. Unfortunately, as I realised when I did a very rough edit of a couple of pages, writing this book without these unnecessary descriptions would cut the word count dramatically, and reveal the paucity of story at the book’s heart. George has never been one to use one word where a sentence will do, but there has usually been more than enough plot and character insight to compensate. If the idea was to use the character of Trinh to show the command crew as they appear to an outsider, then you’d expect some insights that wouldn’t appear normally… but these are conspicuous by their absence.

Verdict: An unusually weak piece of work from someone whose Star Trek novels are usually gripping. 4/10