Thomas Brodie-Sangster has been in the limelight since he made his feature debut, aged 12, in Richard Curtis’s romantic comedy hit Love, Actually. Since then he’s scarcely stopped, racking up a string of roles in films like Nanny Mcphee, Tristan + Isolde, The Last Legion And Bright Star. On television, Sangster plays Gordon and John Tracy on Thunderbirds are Go, but he’s perhaps best known as Jojen Reed in two seasons of the HBO hit Game of Thrones. In The Maze Runner, Brodie-Sangster played Newt, one of Thomas’s first allies in the Glade, and a loyal, true friend. Now the Gladers have escaped the maze, in Maze Runner: The Scorch Trials, Newt’s loyalty will mean more than ever. From the film’s set in Albuquerque, New Mexico, Brodie-Sangster told Joe Utichi about life in The Scorch…

What’s going on with Newt as we head into Maze Runner: The Scorch Trials? 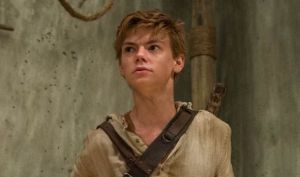 He’s out of the world that he knows and he’s been in the maze for four years. He’s quite established there. So to come out into this world where he doesn’t really have a place – he’s more reliant on the group he’s coming out with. The relationships between all of those characters unite a bit more because we are all we have. The rest of it: either it’s very scary and intimidating and deathly, or it’s unknown. There’s no one you can trust and you don’t know who’s a goodie and who’s a baddie, so we just kind of stick together.

Newt becomes the person that helps drive Thomas along to keep him motivated, keep him going and on the right track. As I think he does with all the characters. He’s that person. Despite how he feels he makes sure everyone else feels secure and that they know what they’re doing, and that everyone has a purpose.

Is there a worry that they might have been better off in the Glade?

Maybe. To be honest, I miss the location of the Glade actually, so I would say so, just personally. I liked filming there. It was great. Albuquerque’s all right. We’re staying uptown and there’s not much around. Downtown, at least, there’s stuff going on and places to go. I don’t have a car when I’m out here so I can’t really get around.

How was the mood on day one, reuniting?

I can’t even remember the first day now! It was quite nice to all be back together again. We all had our new costumes on and we were slowly trying to find our feet. With the first few shots it was just us walking along the sand dunes. It was quite nice because we were getting a glimpse of what our new surrounding was like and what our costumes were like. It didn’t take long and by the end of the day we were right back where we were on the first film.

I know they are! I’m aware of this. I’ve tried to incorporate it in. There’s a couple of moments I think we’ve found. To be honest, it’s very fast-paced, so there’s not an awful lot of moments where I’d call him by his name. But wherever possible we’re going to try and slip it in. And also it means that our relationship just becomes a little more friendly as well. I kind of like it.

There are some fellow Game of Thrones stars on this, who you presumably didn’t work with on that show because of its nature…

No, I didn’t get to work with them on Thrones. We did some scenes on this with Aiden Gillen, which was nice, because I’d met him once on Thrones in the makeup trailer when he came out for a night shoot and I was just coming in to start my day. We were both in a kind of daze. So it was nice to get to actually know him and do some scenes with him. I really enjoyed it.

Is this one more physical?

Yeah, and it can be quite hard work. There are some days that were pretty tough. The sand dunes were quite hard work. They don’t look it, but to run up sand at a vertical angle is really hard, and at this altitude you run out of breath almost instantly. You’re panting, but you can’t get enough oxygen, so you go a bit lightheaded and feint. It’s a really horrible feeling. We tried to do a bit of acclimatising to our surroundings and stuff. We went on runs with the stunt guys to build us up and get our stamina up. I think that did help. But it’s nice to go home feeling like you’ve actually physically worked. I like that feeling. It’s satisfying. 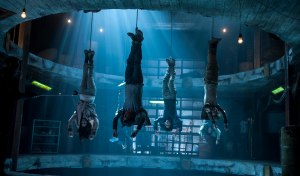 There’s been a trend towards dystopian sci-fi. What do you think it is that appeals to audiences?

I think it’s fun and adventurous and I think as a teenager you go through a lot of changes and emotions. When you hit puberty there are lots of hormones going around. This appeals to people as a fantastical world. It’s so far fetched from mundane life that I know some teenagers kind of struggle with. To a certain extent it’s escapism for them, and it pushes loads of buttons. It’s a fun adventure story that I think is well shot and well acted and I think if it weren’t for those things it’s not worth doing. It has to be a good film to start with. I don’t know why it’s such a big thing at the moment, but I think it’s just fun escapism. I think that’s basically all it is really.

What does it mean to continue this journey with the cast?

It’s great. I was really looking forward to it, from the moment we wrapped on the last one. I’m glad we have the opportunity to do it. We were literally put up in the same hotel, and it’s the same-looking room. We’ve all got onto the same floor and we’re next door to each other, so we’ve created our own little community up there. It’s pretty much the same thing. It’s a year later, and people have changed slightly physically, but it’s nice to get to know the people that I already know again. We came into the project already knowing each other pretty well, and now we’re properly getting to know each other, which is really nice. I’m really looking forward to the next one.

Didn’t you get to celebrate your first Thanksgiving?

It was great. It was lovely. So nice. Kaya [Scodelario]’s also British and she’d never had a Thanksgiving. Her boyfriend came out, and my girlfriend, who’s British, came out. None of us had had a Thanksgiving before, so we rented this log cabin out in the middle of nowhere, in the mountains, and it was beautiful. It was literally made of logs. It had a huge fire and we could look out over the fantastic views and the amazing sunsets and skies. All of us, I think, are pretty good cooks, so we’d take it in turns and cook all day long. By the end we had a fantastic meal and everyone had made a sauce or the potatoes or the turkey or whatever.

Did you go round the table deciding what to give thanks to?

Yeah we did! And actually that’s a really nice thing, I’d never done that before. It was a nice meal, a get-together and a bit of celebration just for the sake of being thankful for whatever. I was thankful for just being in that moment and having the opportunity to be in that wonderful, beautiful place and just be with great people. 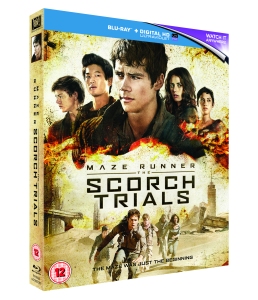 What surprises do you think are in store this time?

It’s got the same set-up and the same characters, and those characters go on to form stronger relationships. By the end of the first movie Thomas had been in the Glade for two or three days or something, so it’s not an awful lot of time to get to know anyone. So that continues and that’s nice. I really like that and the way the relationships expand. All the characters in it are strong characters.

But then these same characters are thrown into a whole different world. A completely different setup. Whereas before they were longing to get out, and they were trapped and confined, in this there’s this feeling of vastness, of space, of just emptiness. It’s a dead world, and they’re hoping that some group or someone or some thing out there will be a place of refuge or a place where the world isn’t as messed up.

In this one the feeling is, as opposed to trapped, it’s very lost. It’s got quite a different vibe. But it’s similar in the sense that it’s exactly the same characters, and you’re following their journey. It’s also faster-paced. There’s lot more locations and moving around; it’s a travelling movie now. Whereas before it was literally confined between four walls.

Maze Runner: The Scorch Trials is out now on Digital HD, Blu-ray and DVD