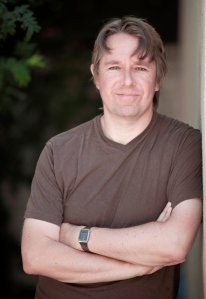 British SF author Alastair Reynolds is the latest big name to pen a Doctor Who novel, following in the footsteps of Michael Moorcock, J.T. Colgan, Dan Abnett and Stephen Baxter. His Third Doctor tale Harvest of Time pits the Time Lord against his old adversary, the Master in a well-observed recreation of the Pertwee era. He recently took some time to answer questions from Paul Simpson:

Obvious first question: how did you come to write the book? Were you asked to write a Who novel, or a Third Doctor one; if the former, why did you choose the Pertwee era?

I was approached to write a Doctor Who novel as part of BBC/Ebury’s new line of novels but the choice of Doctor was mine. I immediately wanted to do a Pertwee era story and as it happened no one else had “bagged” that period, so it all worked well. Pertwee is the earliest Doctor I remember and probably the last one where I was routinely frightened out of my wits, although there were a few moments in the Baker era.

How much of a fan of the show were you growing up? Do you remain one now?

I was a huge fan of the show from about the second season of Pertwee through to the middle of the Davison era. I started to drift away then, for various reasons. I always had a lot of affection for the Doctor but I felt that the show seemed to lose confidence in itself and become slightly silly in a way it hadn’t been in the past. Lately, though, I’ve been catching up on some of the later adventures that I missed, and there’s some good stuff there. Why did it all get so garish and horrible to look at, though? Over-lit, bright colours everywhere – it’s visually horrible, and the brightness seems to undercut any attempt at tension – it’s like the Blue Peter studio!

I do like the new series, as well, although as always with reservations. There have been some very effective stories but also some that haven’t quite hit the mark, but it’s bound to be that way with any long-running show. I don’t care for the new Cybermen, but they were always my favourite of the old monsters so I’m bound to be particular. If I had my way they’d be slow and menacing again!

You’re noted as trying to keep the science in your SF believable; did that cause a problem writing Doctor Who, or did you just adopt those rules where applicable?

It wasn’t really an issue. The important thing for me is not the science itself, which can be as ludicrous as you like, but the Doctor’s attitude to it. One thing I felt that the Pertwee era did well – and which echoed right through the subsequent incarnations – is that the Doctor is a man of science, a sceptic and a rationalist. I do think that’s been slightly lost in the new stuff. Once in a while I’d love the Doctor to say “no, sorry, that’s just not how physics works”, instead of pulling out the sonic and doing something timey-wimey. I really enjoyed Daleks of Manhattan, for instance – it’s a very atmospheric story with some good moments of pure horror – but the climactic plot twist, in which the Doctor’s DNA enters the Dalek experiment – I mean, come on, he’s stuck outside on a lightning rod – how the heck is that supposed to work?

You upgrade the security on the Master – to put it mildly – elevating him almost to a Magneto-ish prison. Did you worry about reconciling that with the rather less stringent regime seen in The Sea-Devils?

Not really – it was more a case of thinking, if the budget had been higher, what might the Master’s prison really have been like? I worked through a couple of ideas (the Master in an aircraft carrier, the Master in a submarine) before settling on the one in the story. You’re right, though, in that there’s something of Magneto’s prison in there.

That in mind, how much did you think about continuity when writing? Were there plot elements that you  had to tweak to fit the story into its place in the overall Who saga? And did you have a year in mind that the story was set?

My knowledge of Who continuity is quite shoddy, so my attitude was to just write it and let my editor Justin Richards sort me out when I slipped up. For instance, right now I couldn’t tell you which of the Peladon stories came first, or tell you the order of the Master’s adventures. I did make some mistakes in having Benton or Yates refer to things they wouldn’t have been aware of, but they were all relatively easy to fix. As for the year, I suppose it’s somewhere around the time of The Sea Devils but I didn’t sweat that too much.

In terms of the actual date, I worked on the assumption that the UNIT stories are not necessarily set in the year of transmission, but perhaps a decade in the future – BBC3 in The Daemons, for instance, and an independent British space mission in one of the other stories [Ambassadors of Death]. That’s why I felt it was acceptable to have desktop computers play a bit of a role on this adventure. I assumed the actual action was around 1980. 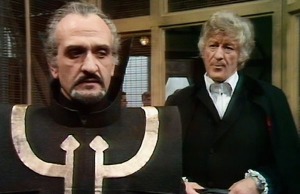 Did you go back and watch the Pertwee/Delgado stories? You capture the relationship between them and the way it sways back and forth very well.

I watched all the ones that I had access to, but there are still a few I’ve yet to catch up on. I’m really looking forward to seeing The Mind of Evil and The Time Monster for instance, because if I’ve ever seen them I don’t remember. Delgado was brilliant, of course – what a fantastic villain he gave us!

Without spoilers, your story gives an intriguing subtext to some of the later actions by the Master – is that just an interesting side-effect, or were you conscious of a shift between the Delgado and later incarnations that you were addressing?

I think that’s just a side-effect. Obviously I was mindful of the later incarnations, and there are a few visual nods to them at one point in the book, but I wasn’t consciously going beyond that, really just trying to do justice to the Delgado character.

Your science-based stories would seem to fit in with the more serious late Baker/early Davison Bidmead take on the show – would you like to write a story set in that period?

There’s some very clever stuff going on around then, isn’t there? I don’t think I really appreciated it at the time, perhaps because I wanted more of the horror stuff and less of the cosmological. That said, I’m not sure how easily I could get down the mannerisms and speech patterns of either late Baker or early Davison. I’d have to watch a lot of DVDs! A hard life, isn’t it?

Are there ‘Easter eggs’ for fans of your mainstream writing, or did you very consciously avoid any sort of crossover?

No, no Easter eggs – to be honest it didn’t even cross my mind. I’m in the middle of a quite ambitious and “serious” set of books in my normal writing, so doing the Who book was a very welcome holiday from all that.

A more general question about writing: what was the first story you ever felt compelled to write down, that you simply couldn’t keep in your head but had to get down ‘on paper’?

The first story I ever wrote might have been about James Bond. I’d been taken to see a double bill of From Russia With Love/Goldfinger and the day after my head was reeling with lasers and cars with spikes that come out the wheels, so I wrote a story about all that. Or it may be one that I still have, which is about an astronaut who goes to the moon with a computer that prints out paper. There’s basically never been a time when I haven’t been writing stories.

Harvest of Time is released on June 6th.

Thanks to Shona Abhyankar for her help in setting up this interview.

Click here to order Doctor Who: Harvest of Time from Amazon.co.uk