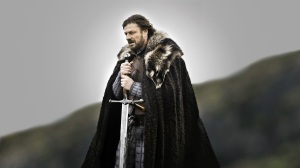 Based on A Song of Ice and Fire, the first in George R.R. Martin’s popular series of fantasy novels, Game of Thrones is a slow-burner that gradually gets under your skin. The series has certainly stolen the crown as champion of great episode endings from the first season of Heroes.

Complicated in terms of clans and relationships, it might take a few episodes to become familiar with who is who and how they’re all related, but once that’s done, this series unfolds like a fantasy version of Dallas or Falcon Crest. With swords.

This is largely ‘realistic’ Medieval-style fantasy with no magic or monsters (yet… there a few dragon eggs around and talk of the ‘white walkers’). Sean Bean fits right in as Eddard Stark of Winterfell, the most relatable of the various family heads, channelling much of his Boromir from The Fellowship of the Ring.

Stealing the show so far are Peter Dinklage as the outcast member of the Lannister family and tomboyish Maisie Williams as Arya Stark, who refuses to conform to what’s expected of her gender.

Chock full of craggy character actors (Iain Glen, Roger Allam, Ron Donachie, Donald Sumpter), the faces of A Game of Thrones are distinctive and fitting. Things kick into a (gruesome) higher gear with episode 5, The Wolf and the Lion and episode 6, A Golden Crown, promising much for the final few episodes of the season.

Verdict: Violent and featuring what might be termed ‘adult situations’ (sex and nudity), this may lack the delirious nature of Spartacus: Blood and Sand, but is seriously enjoyable in its own right.