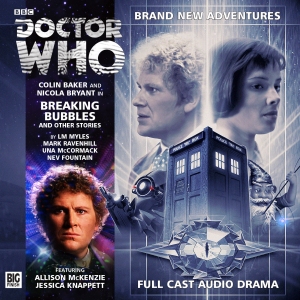 Is anything quite what it seems in these four tales for the Doctor and Peri?

The annual quartet (or foursome, as one of the stars would have it) of stories this year is centred around the Sixth Doctor and Peri, and although there are occasionally moments where you wish that the tales went on longer, or were expanded over more episodes, on the whole, they are well suited to the single half-hour format, with director Nick Briggs ensuring that each has its own very particular feel.

The set begins with L M Myles’ Breaking Bubbles, and the set’s loose theme of perception is at the heart of the story. Neither situations nor people are what you might expect and although there are a couple of parts of the story which are dependent on visual information (which therefore has to be imparted to the audience as subtlely as possible) this works well.

Mark Ravenhill’s Of Chaos Time The is a story that’s told out of order (of which we’ve had another recent example in the Bernice Summerfield New Adventures set), but with a neat twist that sets it apart from others of the genre – it’s the Doctor who’s chronologically disturbed in this, flitting from time period to time period, and we are privy to his thoughts. Ravenhill captures the blustering side of the sixth Doctor well: he may be completely out of his depth but there’s no way he’s going to admit it.

Una McCormack’s An Eye for Murder is a little gem of a tale, which feels as if it’s told in two parts, the dividing point being a significant event in history which is reproduced/recreated here. What starts as a very Dorothy L. Sayers-esque mystery in the sanctified precincts of an all-female Oxford college turns into something much darker, with the stakes correspondingly higher, and the humour vanishing. The role reversal in this for the Doctor and Peri is convincing (and very nicely played by Nicola Bryant particularly) and I’d love to hear another tale for Miss Perry, the lady detective writer, and her typewriting assistant.

The most affecting story is undoubtedly Nev Fountain’s The Curious Incident of the Doctor in the Night-Time, whose derivation is clear from the title. The final scene between Colin Baker and Johnny Gibbon as the special boy, Michael, is another highlight of Baker’s Big Finish career, and I freely admit it brought tears to my eyes. The fact it was so powerful derives not just from the pair’s performances, but also from the spot-on writing of the characters up to that point. Fountain often hides his insights into characters beneath a layer of humour, but sometimes – as with this and Peri and the Piscon Paradox – he uses tragedy instead, and you get something (and there’s no other word) special.

Verdict: One of the best anthology collections from Big Finish. 9/10