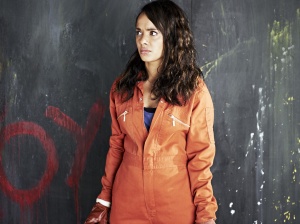 In the wake of Curtis’ death, Finn starts looking for his real father…

No real time to grieve on Misfits – there’s a brief moment with the probation worker insisting on Rudy having counselling – as the focus firmly goes onto the two new characters, Finn and Jess.

The episode approaches death from a very different angle to last week: in that, Curtis took the only course of action that he thought available to him. This time, Finn’s sister is desperately trying to keep her father alive, with her own power, and it’s down to Finn to allow him to have the peaceful death he craves.

The oddest thing about this entire series, in fact, is how little powers are being used by the lead characters. When Finn goes to move something telekinetically, it almost comes as a surprise, and unless I missed something, there’s not been a great deal of double Rudy outside the episode that focused on the three of them. It’s become far more about the youngsters themselves rather than their powers, which might be a problem, given that we’ve lost the characters with whom we’ve built up a connection over the past few years.

Still, at least Alex is showing signs of being interesting at last…

Verdict: Shows have survived a virtually complete change of cast (Being Human / Primeval) but the jury’s out on this at the moment.  6/10