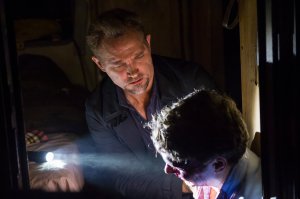 Damien unleashes his darker side…

The battle for Damien’s soul continues – he may be fully human and fully evil but the balance between the two has to gradually shift so that his satanic inheritance eventually comes to the fore. We’ve seen hints of this side of him previously – duing the conversation with Detective Shay at the police station, for example – but the savagery he directs towards his former school mate is the worst yet… even if he is able to prevent himself from actually doing the killing. Once again, someone else sorts things out for him – although it’s a shame that the repercussions of that means we’re not going to see that particular someone again: I thought they had a great deal of potential dramatically. Bradley James pitches the level correctly – his scene after the attack is more frightening, seeing the pent-up rage, than when it’s unleashed.

Ann Rutledge is becoming increasingly hard to read – is she just trying to protect Damien? It seems odd that she believes there’s a chance of destroying the dagger physically: after all, if she was telling the truth last episode, and Damien is just the latest in a long line of potential anti-Christs, wouldn’t one of their protectors have tried it previously?

It’s good that we had some time spent with Amani this week; I’ve always imagined he’ll end up being the St Peter equivalent for Damien’s anti-church and Omid Abtahi is rapidly becoming the centre of various schemings. Megalyn EK’s Simone also has some strong moments – she works well with Robin Weigert’s Sister Greta – and her final scene is very nicely filmed.

I’ve commented earlier on Detective Shay’s incredible run of luck: everyone else is not able to get away from the attacks, but he’s managed it so many times now that it’s becoming really noticeable. The plotline with Shay’s son feels as if it should be something that’s going to go on well beyond the end of this season or it’s going to be rushed, but equally, for Damien to assume his mantle, he’s going to need Shay either gone, or on board Team Damien… Now wouldn’t that make an intriguing Damascene-esque conversion…