Feature: How Far is Too Far? 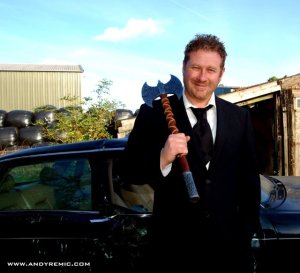 Andy Remic is a British writer with a love of ancient warfare, mountain climbing and sword fighting. Once a member of the Army of Iron, he has since retired from a savage world of blood-oil magick and gnashing vachines, and works as an underworld smuggler of rare dog-gems in the seedy districts of Falanor. In his spare time, he writes out his fantastical adventures. His latest novel, The Dragon Engine, from Angry Robot features his usual blend of action, violence and characterisation – and in this feature, he discusses the use of violence, and whether readers can become inured to it…

When it comes to violence in books and films, I don’t believe there is a “too far” in terms of what can be written or shown (although Human Centipede made me feel physically ill, but maybe I’m just a wuss, heh). My favourite TV show which informs and depicts graphic violence would have to be “the news”, that wonderfully reflective reporting tool of the real world. From animal testing to murder to genocide, there’s no escaping the atrocities the human race inflicts upon itself and the planet. Thus, when it comes to writing, I believe I have free rein to have as much graphic violence as I deem necessary to tell the story – but most importantly – without getting in the way of the story. To steal Stephen King’s idea, violence is simply part of my writer’s toolkit, a tool which aids storytelling in my hardcore fantasy worlds.

However, I believe if there is too much violence without variance in the pace of the story, then yes, it becomes violence for violence’s sake, and thus loses the ability to have impact. It’s like the graphic horror movie that constantly throws blood at the screen amidst thrashing and screaming. Yawn. And much as I love The Walking Dead, after so many seasons the zombies have become a bit… repetitive. So in a book, the writer’s job is to pace the story and action well, and to use violence sparingly so that when it does kick off, it has maximum impact.

In The Dragon Engine, my latest fantasy novel published by Angry Robot Books, there are many scenes where it kicks off and heads are flying, people (and dwarves) are burning, arrows are punching through eye sockets, faces are being chewed off, and men in shackles are being tortured. And yet there are also many scenes of calm, where my characters engage one another in conversation, and the plot unfolds, and previous relationships are revealed, and love and caring are shown. I see the story like a rollercoaster, with peaks and troughs, only each successive peak reaches higher and higher until the climax of the novel explodes. What is important, and sometimes overlooked, is to have enough troughs, because they give the reader time to breathe, give a chance to unfold character intricacies, and ultimately break up the action (and violence, in my books, because both go hand in hand). It’s a balancing act which the author has to work hard at to get right. I hope I have!! You’ll have to read The Dragon Engine to find out.

The Dragon Engine is out now from Angry Robot. Click here to order it from Amazon.co.uk