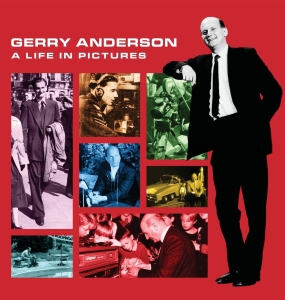 Jamie Anderson’s foreword tells you pretty much everything you need to know about the provenance of this book. Unlike many biographies which might include a ‘plate’ section that shows the subject in a flattering light, and showcases the ‘famous’ shots, this book features a sequence of photographs that tell the story of a man – from birth to death.

I’m of the generation who grew up on the Supermarionation shows – Captain Scarlet, most appropriately, was the first show I ever saw in colour (which makes the monochrome shots in here slightly ironic); Sunday lunch was delayed because Thunderbirds was repeated at 1 p.m. on ITV. One of the “pinch me” moments of this job was the chance to interview Gerry when Dick Spanner was released on DVD. In an odd sense, because the shows permeated my childhood so much, it felt as if Gerry Anderson was part of my own extended family and this book allows a peek at the sides that I never had a chance to find out about.

The early photographs are, of necessity, personal – Gerry as a child, with his older brother Lionel; his parents; Lionel during the Second World War. The memorabilia from that time include his first job reference and his call-up papers for National Service, and from there we move towards his first series – although along the way we meet Gerry’s first wife and oldest children. Behind the scenes shots from the 1950s shows (including Nicholas Parsons with the puppet of Four Feather Falls’ Tex Tucker as well as on location for a travel documentary) are followed by similar for the 1960s, such as water filming for Supercar, juxtaposed with more candid pictures of the team led by Gerry and second wife Sylvia.

It’s a format which is followed throughout the book with sometimes surprising backstage shots alongside concept art for Century 21 (or Fireball XL5 as we know it today) or Stingray. Page 63’s shot – taken from the Thunderbirds episode Security Hazard – gives a clear picture of the complexity of what was being undertaken; twelve pages later there’s a shot of Gerry Anderson jnr. The 1970s section kicks off with photos of the Andersons’ home and there are equally unusual shots a little later from the little-known pilot The Investigator.

There seems comparatively not as much from the later years – the time of Dick Spanner, Space Precinct and new Captain Scarlet or Gerry’s third marriage – although what is here is fascinating, but that perhaps reflects the way in which Anderson’s work was regarded by the powers that be at that point. New Captain Scarlet was butchered by ITV – there’s no politer way of describing it – and his various ideas for a new Thunderbirds never got off the ground.

The Alzheimers which afflicted his final years didn’t prevent him from coming up with ideas – as Gemini Force 1, the new book series, will shortly demonstrate. But as the tributes on his coffin display, he will always be remembered as the FAB creator of Thunderbirds, and this beautifully produced book is a fitting tribute to one of the great creative forces of the second half of the twentieth century.

Verdict: Whether you’re a Supermarionation fan, interested in Gerry Anderson’s life, or have a general regard for TV history, this book is for you. 9/10

Click here to order Gerry Anderson: A Life in Pictures from Amazon.co.uk