Review: Doctor Who: Series 9 Episode 6: The Woman Who Lived (spoiler-free) 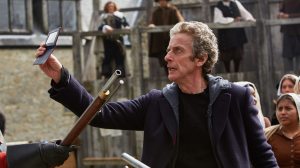 If you’ve been following the various spoiler-free reviews that have been posted around the internet in the lead-up to each Saturday’s new Doctor Who, you may have noticed that this week pretty much everyone is being extremely cagey in terms of details – even on aspects of the episode which have featured in the trailer and/or the pictures released. As much as anything else, that’s because you really don’t want the structure and surprises of this episode spoiled before you see it: it’s a very different sort of instalment from anything else we’ve had this season. Tonally, it’s an odd one – there’s an underlying serious aspect, but the highwayman element feels like a Horrible Histories episode (which isn’t necessarily a bad thing!).

Maisie Williams and Peter Capaldi spend a lot of the episode together and, as with his scenes with Julian Bleach a few weeks back, it’s clear that Capaldi enjoys the opportunity to have two-hand dialogue scenes that are about something more than simply moving the plot forward. And there is a plot – perhaps not the strongest that we’ve had in recent time but one that is pretty linear and easy to follow, with Rufus Hound and Ariyon Bakare both making an impact.

Verdict: An unusual episode that I suspect will divide opinion even more than usual! 7/10