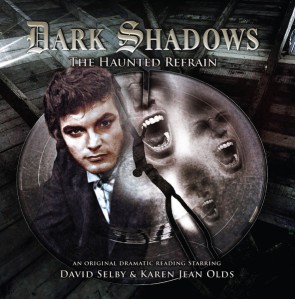 In which Barbara and Grant Douglas (Olds, Marx), recent transplants from New York City to Portland, discover an antique gramophone in their new home’s dusty attic – which somehow speaks to Barbara with the voice of a man who should be long dead…

Quentin Collins’ somewhat abrupt introduction into present-day Dark Shadows as an amnesiac named Grant Douglas has always been a source of intrigue to fans. What had he been up to for decades after his timeline was altered so that he never died? How had he lost his memory, and why was he going under that name? While Big Finish has been dutifully “filling in the gaps” regarding Quentin’s post-1897 activities for several years now, they’ve finally tackled this issue head-on. But fittingly, they’ve done it in a way that raises more questions than it answers.

Most of The Haunted Refrain concerns the interplay between Selby’s disembodied Quentin and Olds’s discontented housewife, who set aside a career in journalism for the promise of wedded bliss, but now chafes at the prospect of gradual “death by cocktail party”.

Since Barbara helps Quentin make sense of his scrambled memories, this story could serve as a good starting point for newcomers to his ongoing narrative. Their chemistry is palpable – which is more than one can say for Barbara and Grant. While this is part of the story’s premise, the fact that Andrew Collins’ original performance as Grant was lost due to circumstances beyond Big Finish’s control, inadvertently adds another layer to the proceedings. Jonathon Marx stepped in at the eleventh hour to take over the semi-thankless role – essentially an emotionally-cuckolded gooseberry of a man – and does what he can with the part, but it’s a thinly-sketched one at best.

Quentin’s state of being here is no less preposterous than some other Dark Shadows plot twists I could mention, but it’s a wholly appropriate one for a Big Finish audio. By the end of this story, we know the “why” and to some extent the “who” put him in this state, but not the “how”. Still, I’m sure these narrative gaps will be plugged in due course…

Click here to order The Haunted Refrain from Big Finish