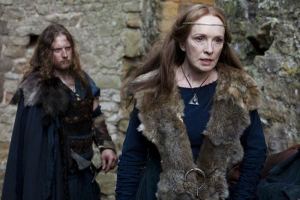 A much more serious episode again, with very little humour at all, as Arthur begins to come to terms with the requirements placed upon him by being King. His progress isn’t helped by his uncle Agravaine’s agenda, which appears to be based on getting Arthur into as much trouble as possible in the hope that he won’t be able to get himself out of it, thereby leaving the throne free for Morgana. It would be good to know exactly what Agravaine thinks he’ll achieve with Morgana on the throne that he couldn’t when acting effectively as Regent in the year before Uther’s death, or in his position as advisor to the King as now…

Although Tony Head’s Uther may now be firmly part of the show’s past, the character still exerts a large influence. Lindsay Duncan’s opposing queen hits the nail on the head when she compares one of the characters to Uther, and not in a complimentary way, while Arthur starts by trying to live up to his father’s reputation and eventually comes to realise that he needs to be his own man.

It’s quite surprising that the B-plot concerning Guinevere is resolved quite so quickly: there was plenty of scope there for that to fester for a bit, and fans of Gaius and the Dragon will be disappointed by their (lack of) input this week. But for those who have enjoyed watching this show mature into a new slant on the rise of King Arthur, this is a key week.

Verdict: A strong week for Bradley James as Arthur starts to become his own man.  7/10

Check out our earlier reviews here