Robert Alonzo has worked on many genre movies and TV shows as stunt man and stunt coordinator, but Brad Bird’s recent Disney hit Tomorrowland presented some very particular challenges, as he explained to Paul Simpson…

How did you get involved with Tomorrowland?

Jeffrey Chernov (whom I had worked with on Star Trek and Mission Impossible: Ghost Protocol) called me to come meet with Brad Bird regarding Tomorrowland. Because I had already worked with Brad on Mission IV, we already knew each other and the meeting went great. I was fortunately offered the job.

What were the particularly challenging aspects of Tomorrowland?

Tomorrowland was one of the most challenging movies I’ve ever worked on not only because the appetite for the action was so big, but because the locations were spread throughout Canada, US, Europe, and the Bahamas. The weather wasn’t always cooperative either. Having to shoot wire work and fight scenes in below-freezing temperatures was definitely a challenge when the world of Tomorrowland was supposed to be warm and inviting.

But mainly one of the most challenging aspects of this film was the fact that most of the action involved children. That meant training some of the cast 3-4 months in advance and continuing the training while shooting. Fortunately, I was able to meet and work with Brad, the storyboard artists, the Pre-vis team, and the VFX team early on to maintain a good work flow from concept to execution. During prep in Vancouver, I would also work very closely with the Art Department/Construction and SPFX to ensure we were on the same page when it came to safe performer and set/mechanical interaction. We would also have meetings daily to make sure everyone was updated on each department’s progress to enable sufficient rehearsal times and to ensure we were updated of script or departmental changes or delays as soon as they happened. These meetings were so helpful in keeping everybody in sync.

An example of a couple challenging sequences were the first failed jetpack sequence as young Frank crashed through the corn fields, and later on in the movie when young Frank falls off the tower and grabs his jetpack as he’s falling to the ground in Tomorrowland. These sequences in the movie were some of the most prepped and rehearsed scenes because the goal was to get as much action in camera as possible while shooting a 10 year old boy who had never done stunts in his life, nor had the experience of flying or ever being in a harness. Moreover, he was initially scared of heights.

Because all these factors presented themselves when we were early on in production, I had to devise a plan that would take several months of preparation that included the use of a location solely for testing, several cranes, locations scouts and specs that were measured to provide accurate and safe distances for a performer and camera synced flying rig, and a rig that employed the use of an open air mobile wind tunnel.

There are several other sequences in the movie that were extremely challenging but these are the first that come to mind because of how much planning it took from all the departments, from Locations to Transportation to H/MU/Wardrobe to VFX to Props to SPFX and of course Stunts. We had such a great team.

Were you involved in training Raffey Cassidy? If so, was it more difficult training her as she was much younger?

I was involved in every step of Raffey’s training. She was incredible to work with! She was such a sponge and tirelessly eager. I’d say she did around 90% of her own stunts. She was amazing.

Not only did we teach her martial arts, gymnastics, how to ride a wire, how to drive a car, but we also taught her how to do her own fire burn. She was fearless, tough as nails and she loved all the training.

I first met Raffey at the Disney Burbank production office after I was told she was probably going to be cast as Athena, but they wanted to make sure she was physically capable of handling such a physical role. I put her through a quick 30 minute evaluation to check her aptitude on picking up movement, and by the end of the session, I was convinced she would make Athena come to life. I told Brad and the producers that they were very lucky to have her.

She then had to go back to England for a couple months. That meant I had to get her training started immediately in Manchester so I could give her a head start before she came to us in Vancouver. I found a couple different instructors that were local to her and discussed with them in detail the regimen I needed her to maintain in order for a smooth transition once I got to train her in Vancouver. The plan had her training in traditional martial arts 3 times a week and gymnastics 2 times a week so she could develop her strength, conditioning and have a base of knowledge so we didn’t have to start from scratch.

Once she got to Vancouver, we continued her training in more detail, focusing on stances, range, distance, and timing. We also worked on acrobatic movement, wire work, and sprinting drills to make sure she looked heroic through and through.

However, one of the biggest challenges of her training was getting her to transition from a sweet and friendly 11 year old girl who loved the training so much she smiled with every punch and kick, to a fighting machine that displayed the intention and the power of an adult. This was difficult because she, of course, had never been in a fight nor would she ever want to hurt anyone. I had to let her know that the power of her character isn’t only seen in the impact of her hits but in the intensity of her eyes and face; and that they were all interrelated.

To give her something to relate to, I asked her to picture someone trying to hurt one of her siblings and that she had to protect them. I then put her through drills where she had to hit focus pads and yell as loud as she can with every move, “Leave! My! Sister! Alone!” I felt her energy come through the pads as she did each kick, punch, knee and elbow, knee and saw the protective nature in her face make that transition and I got goosebumps knowing that she understood. She even broke boards in her training so she could understand her own power.

All together it took about 5 months of months of training before she did her first fight scene, then continued her training throughout shooting to maintain what she had learned. Raffey was fantastic! 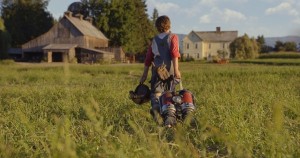 What was the hardest sequence to achieve and why?

I’d say the hardest sequence to achieve was the failed jetpack scene in the corn field. When I first saw the pre-vis very early on, I assumed that most of it was going to be done against green/blue screen with digital doubles and face replacement, but when I was told they wanted this sequence all in camera, I said, “But that’s a boy flying and crashing with a jetpack at what looks around 60-80mph?! How are we going to do that?!” I vividly recall Tom Peitzman (VFX Supervisor) looking at me and saying, “That’s what you’re here to figure out. We’re just taking care of any wire or rig removal.” I said, “Okay, no problem. Just need time to scout and figure out a plan.”

The hardest part about this sequence was, of course, executing the pre-vised action with our 10 year old actor Thomas Robinson and designing a rig that could accommodate both the actor’s face, syncing up a 500lb. 3D camera rig with the 2D flight of the performer. All this, while allowing for safe and repeatable ground interaction through mounds of dirt and a breakaway fence which eventually led to a field of breakaway cornstalks. Most flying rigs I’ve seen in the past have always been about the flying, and the crashing was usually a hand-off to VFX to enable a more violent impact. This sequence, however, was definitely new and different in this particular case.

Nowadays stunts are more scientific [than they used to be], but it is not an exact science. Therefore, this sequence took a couple months of scouting, planning and eventually testing at a site that could accommodate two 200 ton cranes 800 feet apart, with a flying run of approximately 350 feet for both camera and performer, with designated impact points along the path. We had to rehearse at a different location because the shooting location still needed to be prepped and the actual corn needed to grow in. Also because all the action was to be shot in camera, all the weights of the camera rig, the performer, the wardrobe, and the props needed to be measured precisely to enable repeatable action with the weight of all the lines and the winch system.

Once the theory of execution was successful and approved, we had to test the theory at the actual location. This took another few weeks to make sure we could adjust to the changes that the shooting location presented. Once we were all dialled in, it took about a week to shoot. It was very time-consuming and there was a lot of testing for a sequence that lasts a handful of seconds in the movie. But once it was done, we all celebrated because Brad was extremely happy with the outcome. I could tell he was happy when he jumped out of his director’s chair and shouted, “That was AWESOME!!! That is definitely making it in the movie!!!”

When you saw the final film, which part did you think came off the best?

There were so many moments that I thought worked great. It’s really hard to choose when each sequence presented their own unique challenge. The story and the world of Tomorrowland lent itself to so many possibilities that challenged new ways to bring live action to the big screen.

I really liked when young Frank fell off the tower and went through his flight through Tomorrowland. I also thought the Dave Clark attack on the Farmhouse was really creative and visually interesting. But there’s also Athena’s introduction to the present and the Blast from the Past fight that was exciting. And you can’t forget the end sequence that included Athena fighting robots and Frank and Nix fighting through a portal. That had so many great elements.

It’s really hard to choose one especially since I was passionate about all of them, and like a good parent, I don’t like playing favourites.