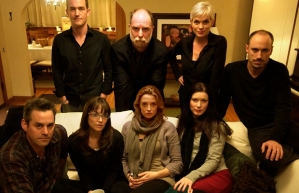 A dinner party attended by eight long-term friends is interrupted by a series of weird happenings—is the passing comet to blame, or something else…?

To reveal too much about Coherence would be to spoil your enjoyment of the film, and that makes it hard to write about without revealing some of the (admittedly low key) twists and turns the movie relies upon for its effects. Early on a theme is established in the meal preparation chat among these diverse friends: they talk of unfulfilled lives, of ‘might have beens’, if only circumstances had been different. Em (Emily Baldoni) lost her chance to become a prima ballerina, while actor Michael (Nicholas Brendon) has never scored that big break, despite four years on a television show (and it’s not the one you’re thinking of, an observation that only becomes important in retrospect…).

Complicating the evening is the fact that some of the couples around the table are made up of ex-partners of others at the dinner, making for a tense meal even before things turn weird. It starts slowly, with the loss of cell phone and internet connectivity, then the shattering of phone screens, and finally a power blackout. People freak out and even act out of character, but is all this due to the comet, mass hysteria, a drug-induced group hallucination, or something even stranger?

There’s one house in the neighbourhood still lit up, so a pair of the male dinner party guests venture out to see if they can contact the residents. They (seemingly) return with a weird tale to tell: the other house contains doppelgängers of everyone at the dinner, and they’ve found a mysterious box full of pictures of all the dinner guests with random numbers inscribed on the back. From here things spiral in even odder directions…

Coherence is packed with smart science fiction ideas, good relationship drama, and some heavy existential questions about what makes people individuals. For those who’ve read widely in the genre (rather than just watched film and TV), much of Coherence explores familiar ideas, but it does so in a smart fashion. This is a movie of ideas, but one with an appeal to the indie mainstream. It is rather subtle, and would probably stand up to repeat viewings with each re-watch adding more to the experience.

As well as Buffy alum Brendon, the film features a good role for one-time Highlander co-star and Highlander: The Raven lead Elizabeth Gracen. The movie cleverly riffs on their genre connections, especially in respect to Brendon who (even down to the suggested alcoholism) seems to be playing an exaggerated or alternative (a word chosen here with some care) version of his real world self.

Partially shot in a handheld, low-key style, Coherence is well-scripted and nicely played by all involved. There are no fights, explosions, or aliens, making this low budget cerebral sci-fi at it’s intriguing best. The only thing that lets the film down—as is often the way with clever puzzle-driven movies like this—is the ending, or rather the lack of a definitive ending.

Verdict: If you like your movie sci-fi to be smart and clever, Coherence should be very satisfying, 8/10